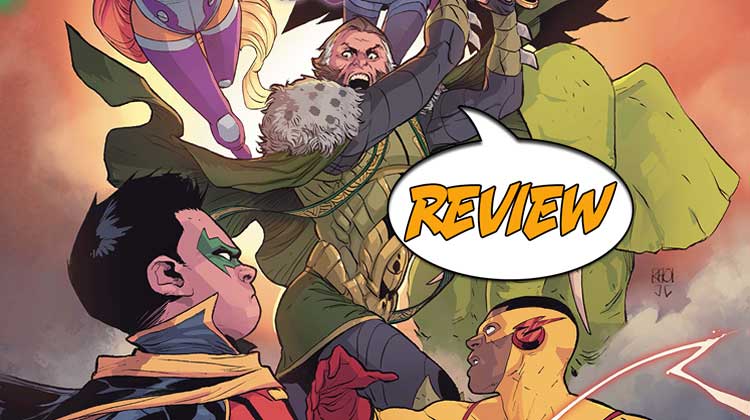 I reviewed the second issue in this series a few months back, and I liked what I saw then. What about the conclusion to the first story? Did that hold up?

Previously in TEEN TITANS: “Damian Knows Best” finale! The final showdown between the Teen Titans and the Demon’s Fist is here! Will the Teen Titans rally behind their little leader? And will Ra’s al Ghul let anyone walk away alive?

TITANS THE SAME, YET DIFFERENT

On some levels, this comic is just what made the Teen Titans quite popular. We have Robin, Kid Flash, Starfire, Beast Boy and Raven, some of the heroes that made the group a powerhouse for DC Comics. No Cyborg, though, as he’s graduated to the Justice League.

Also, each character is somewhat different. Well, that is, except for Beast Boy, who’s pretty much the same as he’s always been. However, Robin is now Damien Wayne, Starfire is older and more matronly (not nearly as sexual as before), Raven’s more birdlike, and Kid Flash is a different guy under that uniform, adding diversity to the team.

This initial storyline has focused largely on Damien Wayne, who actually ends up with his teammates as friends, as he likes to point out. This Robin incarnation has been very solitary up until now, claiming he needs no one but himself. Well, he’s finally “coming of age,” as it were, in that he’s realizing that he truly can’t do it all himself.

Of course, taking on his maternal grandfather, Ra’s al Ghul and actually walking away from it all, that’s a change for Damien. Not only does he confront the Demon’s Head, but he also takes steps away from his father, Batman, in the final pages of this issue. And Robin gets to call out the team’s action phrase, “Titans, Go!” Hey, I liked it!

The teens have found things to like in each other, and that’s good for all of them since they often don’t have people they can relate to, being superpowered and all. That’s healthy for all of them, I feel.

By the end of the issue, much of the familiar formula for the Teen Titans is back in place, including the Titans Tower, these teens working and living together, and a major confrontation successfully completed.

The important thing to accomplish when it comes to the Teen Titans is to make them, well, teen. When you’re under a mask or your face is in the shadows, it’s tough to be a young person, seems like.

However, this issue’s art team does a great job of keeping the guys and gals looking like teens in both facial expressions and body forms. The action and drama work well, and it’s a visually strong concluding issue.

BOTTOM LINE: Putting the ‘Teen’ Back in ‘Teen Titans’

This initial story has been a strong one for the Teen Titans, establishing them as individuals in their own rights while blending them together as a group. Nicely done!

At the end of the book, we find that in the sixth issue, a sixth Titan will appear. Superman’s son? We’ll have to wait and see.

Still, it’s been a good kick-off to the series. If you missed it, I wouldn’t worry – there’s very likely to be an affordable trade paperback in your local shop very soon. I recommend you try it out!

It’s been a good kick-off to the series.