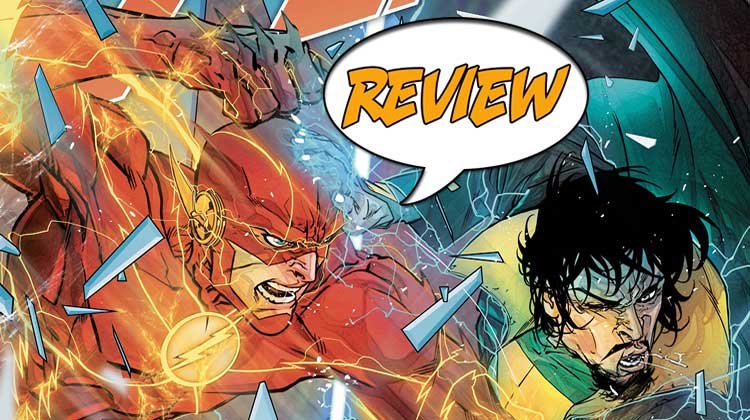 There’s just something about the Rogues that brings out the best in Barry Allen. This is Mr. Williamson’s first go-round with them, and it’s truly great, in my opinion!

Previously in THE FLASH: “ROGUES RELOADED” finale! In this epic conclusion, the Rogues defeat The Flash! Or so they think. To save the day, Barry Allen’s got to take down the mastermind behind the Rogues’ ultimate heist…the original Rogue; the one who always got away. That’s right, it’s The Flash vs. Captain Cold!

CAN THE ROGUES OUTSMART THE FLASH?

When one is outnumbered as the Flash is when he takes on the Rogues, you have to wonder if Barry can outmaneuver these “bad” guys. Granted, they function with their own rules and guidelines, but that many minds joined together in one purpose – to defeat the Scarlet Speedster – that’s got to be a problem!

On the other hand, Barry’s noggin has to be running at a speed similar to the rest of his body or else he’d end up in a heap at every turn he runs in to. So he’s got an advantage over the “normal” minds of the Rogues.

This conclusion begins with Snart (Captain Cold) having thought of something he’s never considered before – that he can tap into the Speed Force and combine it with his arctic power. When it hits Barry, it not only makes him cold. It also disrupts the Speed Force inside of him. He could be killed by that!

Can Barry outthink this very deadly power wielded by one of his enemies? Well, let’s just say that there will be another issue in two weeks, so the answer is likely, “Yes.”

Still, with all the decades of Flash storytelling, it’s really cool (sorry, couldn’t help that) to see a peril we haven’t seen before. At least, I haven’t seen anything like that in my decades of reading Barry’s books.

We also see what the Rogues think about living a “normal” existence. Captain Cold calls it “the waste of a life,” and it’s logical to assume the rest of the crew believes that as well. This all comes up when Barry attempts to appeal to Snart’s “better angels.” Yeah, like that would ever work!

Then, too, we discover that the Rogues want respect, but Flash shows them that’s not what they’ve earned in their escapades. It’s fear, something they didn’t imagine, somehow.

The characterization continues to be strong, and the plotting is breakneck (of course) with surprises all along the way.

It’s no wonder this is a favorite book of mine these days!

I always used to wonder how one could show super-speed in a comic. After all, the movement should be faster than the eye can grasp, so it should be impossible to see. But the current art team really makes the meta-action as powerful as I can imagine it being.

It’s important to display both emotion and action strongly, and I really found the variation in characterization from Snart to Barry and the rest very strong indeed. I couldn’t take my eyes off it!

BOTTOM LINE: ‘The Flash’ Continues to Speed Along

When I first heard Mr. Williamson was taking over the writing chores of the Flash, I wasn’t certain what to expect. Yes, he’s been great with superheroes, but the Flash has been a challenge not every writer has been able to tackle. That’s not true with Williamson, who is having a ball and splattering my brain against the wall issue after issue!

And that final sequence in which Snart’s ambitions come to light? I liked that! It’s always fun to see a baddie with a master plan or two take on the hero we think is impossible to beat. That only makes them more interesting in taking him or her on!

I know that Detective Comics and Hal Jordan and the Green Lantern Corps are getting all the attention, but right up there with them should be The Flash, which is one of the very best reads I dive into when the new issues come out! Fun, high-octane energy, surprises, challenges? Yup, all there, and all what you’d expect reading a comic focusing on the Fastest Man Alive.

The Flash is one of the very best reads I dive into when the new issues come out!