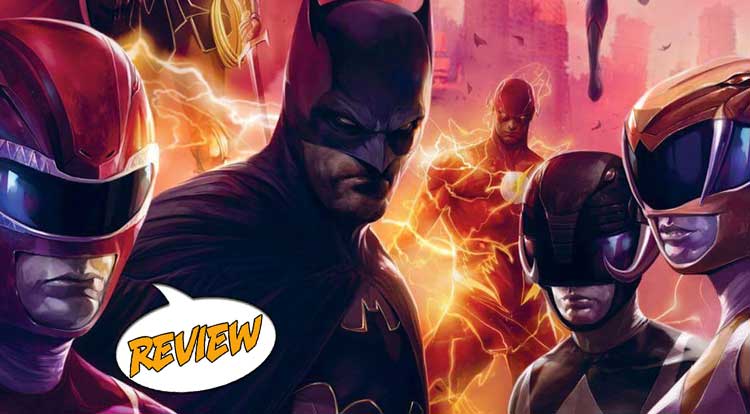 Previously in Justice League/Power Rangers: In the city of Angel Grove, a menace from space has repeatedly attacked, forcing an energy being named Zordon to gather five teenagers with attitude (a sixth joined up later) to channel ancient power coins as the Mighty Morphin’ Power Rangers!

In another universe, the greatest heroes of all time have pooled their resources and strengths together: Superman!  Batman!  Wonder Woman!  The Flash!  Cyborg!  Green Lantern!  Together, they are The Justice League Of America!

As our story opens, we find the devastated Rangers staring into the massive crater that used to be their home, the city of Angel Grove.  Black Ranger Zack falls to his knees, blaming himself for the carnage, only to hear a response… from Superman?  Jump back in time a few days, and we find the Rangers searching for Alpha-5, who set off to make a perimeter check and didn’t return.  Zack brings him back to the Power Chamber, only to find that the whole thing is a ruse by the evil Lord Zedd, who explodes Alpha and attacks full force with his underlings.  In a desperate bid to combat an opponent way out of his league, Zack triggers the teleporters, only to find that the explosions have damaged that equipment as well, sending Zedd (and the Black Rangers) further away than he expected: Gotham City.

I was actually pretty surprised at how successful the opening sequence was at building suspense and unease (although I’m starting to see the “start with something terrible, freeze-frame and jump back in time” technique a lot lately), and the detonation of Alpha was flat-out shocking.  Zack’s battle with Batman, whom he has mistaken for one of Zedd’s monsters is well-balanced, until Zack’s teammates arrive, reminding me that the Power Rangers whole shtick is ganging up one guy and beating him down.  Stephen Byrne’s art is quite well-done, as well, especially in action sequences, with strong storytelling throughout (and, most importantly, the helmets look great.)  As the issue ends, The Pink Ranger and her Pteranozord have engaged Batman, leading Flash to call for backup with what might be the best line of dialogue in recent memory:  “Batman has been taken by a flying pink dinosaur robot!”

Crossovers like this tend to be pretty formulaic: Set up giant menace that somehow crosses dimensional borders, get teams together, set up a mistaken fight, cliffhanger!  Justice League/Power Rangers #1 doesn’t break that formula, but doesn’t suffer for it, delivering a strong first chapter for a crossover I’m quite excited about, earning 4 out of 5 stars overall.  I’m not going to say that Batman getting flummoxed by a 17-year gymnast didn’t enhance my enjoyment, but when the entire JLA arrives, I’m expecting a more balanced battle.

Worth the price of admission just for the final lines...