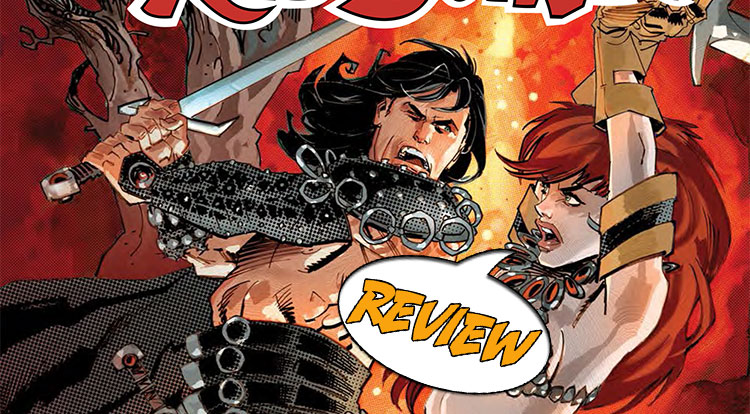 Conan and Red Sonja have been around for 83 years (one a bit longer than the other), but when you think of one, you tend to think of another. The comic adventures of these two warriors currently takes place at different companies; Conan at Dark Horse Comics, and Red Sonja at Dynamite Entertainment. What happens when the two publishers throw their heroes together in a grand act of synergy? Let’s find out in this early review of Conan Red Sonja #1! Previously in Conan: Conan, what is best in life? “To crush your enemies, to see them driven before you, to hear the lamentations of their women!” Life is good for the Cimmerian.

Previously in Red Sonja: “She’s a she-devil with a sword! She’s written by Gail Simone! Life is good for readers around the world!” (sung in your favorite made up power anthem).

YOU GOT YOUR CHOCOLATE IN MY PEANUT BUTTER

This isn’t the first time Conan and Red Sonja have met. The last time the two crossed swords was over fifteen years ago, and it’s about time the two got together again. Gail Simone and Jim Zub do a great job of setting up a tale of two warriors entering the city of Enshophur to steal a “rare gem” that is to be presented to the prince of Koth. As most comic tales have it, the two did not know the other was in the city, and they are instantly at odds over who gets the prize. It’s really interesting that Simone and Zub have elected to make this a first meeting tale between the two characters, which means before you get halfway through the book, the two are fighting with one another… and then they stop fighting.

The jewel they stole, turns out to be something completely different, and if you are a fan of Robert E. Howard, H.P. Lovecraft, Gail Simone, and Jim Zub, you know that what Conan and Red Sonja find is something that makes the Hyborian age a place to be feared. Our heroes dispatch with what they found… or did they? Conan Red Sonja is a four issue mini-series, and the closing pages lead me to believe an epic battle of “good” vs. evil is about to begin.

I don’t know how Gail Simone and Jim Zub collaborated on this project, but the two happen to be writers than rank among our favorites at Major Spoilers, and from your humble writer’s point of view, this is an excellent first issue. Simone and Zub hit all the right points that lead the heroes naturally through the tale, and set up multiple villains that will be hot on the trail of our heroes in future issues. The banter between characters is witty and snappy, the over the top king is over the top in his delivery, and there isn’t a panel that feels wasted.

YOU GOT YOUR PEANUT BUTTER IN MY CHOCOLATE

Having two great writers that work great together is a wonder that we don’t get to see work so well that often. Having Dan Panosian on art, and Dave Stewart on colors is icing on the cake. There are things that Panosian does in this issue that really gave me pause – an interesting angle, a small detail added to the background, really capturing the motion of a figure on the page are simply stunning. While I like how he brings Red Sonja to life, the introduction/reveal of Conan is fantastic. You’ll want to pick up this issue, simply for the double page spread of the two fighting. The scene is something that fans will want to have as their desktop background, and whoever is able to grab the original art is going to smile each time he or she looks at it.

The art only gets better with the colors, and Dave Stewart is a colorist that has become one of those names that lifts a comic higher in my esteem because of his attention to detail. In this book, a majority of the story takes place at night, and what he does with open flames and the way they affect the colors in the scene is something everyone should examine closely.

Conan Red Sonja #1 is like a creamy chocolate delight surrounding a peanut butter center. Seriously. Two great writers, a fantastic artist and colorist team to bring a book that simply works (and will probably make me gain a pound or two just from comparing this book to a peanut butter cup). An ominous setup, two heroes that meet, fight, and then come to an agreement, fantastic design and colors, makes this an incredibly fun read. As each new issue comes out, I’m going to sit down and re-read all previous issues just to delight in the buildup.. Mileage will always vary when it comes to these characters that use violence as a means to an end, but this is a solid book that deserves a look.

Two great writers, a fantastic artist and colorist team to bring a book that simply works. Pick up the book, it is so worth it.