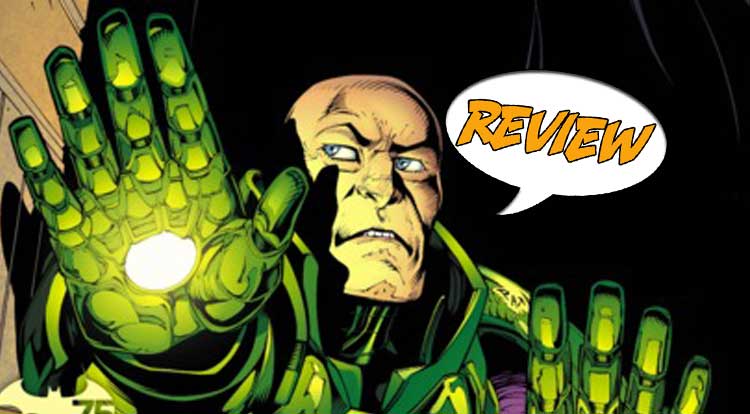 Stay out of Batman’s way, Justice League. Nothing will stop Batman from bringing his son back from Apokolips in the newest issue of Batman and Robin.

Previously in Batman and Robin: Damian Wayne’s body has been stolen to Apokolips!

Following directly on the heels of the excellent Robin Rises one-shot, this issue of Batman and Robin decides to slow down and give us some great character moments. For the first time since Death of the Family, Batman sits down with the Bat kids and imparts on them the importance of his mission. Making each of them promise to keep Gotham safe. We even get a nice moment with Dick Grayson where Batman asks him to be Batman again if he doesn’t return. These moments in the Batcave emphasize what Peter Tomasi has been excellently doing since issue one of this book. Giving us great emotion seen through the lense of the relationships of these characters.

Before Batman can rush off to Apokolips, he needs the special armor that the Justice League built him on the Watchtower. Like a grand chessmaster, Batman tricks the pawns into doing his bidding. Which leaves him one on one with Lex Luthor. I haven’t been the biggest fan of this “Post Forever Evil” Luthor. It’s a neat idea to see him on the Justice League, but the fact that he now knows Batman’s identity is troublesome for me.

Of course, Lex doesn’t Batman and we get a last page splash of where this storyline is going. Tomasi does an excellent job of peppering great character moments throughout this book. From Shazam’s joking to Lex’s monologue, Batman and Robin always does a great job of making the New 52 seem like a real place inhabited by real people.

Artist Patrick Gleason, inker Mick Gray, and colorist John Kalisz are one of the strongest artistic teams working is superhero comics today. Their style gives a nice look to the action and all the characters without feeling too cartoony or stylized; which is a complaint that can be levied at most New 52 books. Colors and lines pop. While your eyes will love every panel and page.

Batman and Robin has always been the little hidden gem of the Batman books. Each issue has been solid, and this issue does not disappoint. There’s heart and purpose behind every piece of action. Nothing is just for the sake of it. If you’re excited about the Robin Rises event, then this issue is a must buy.