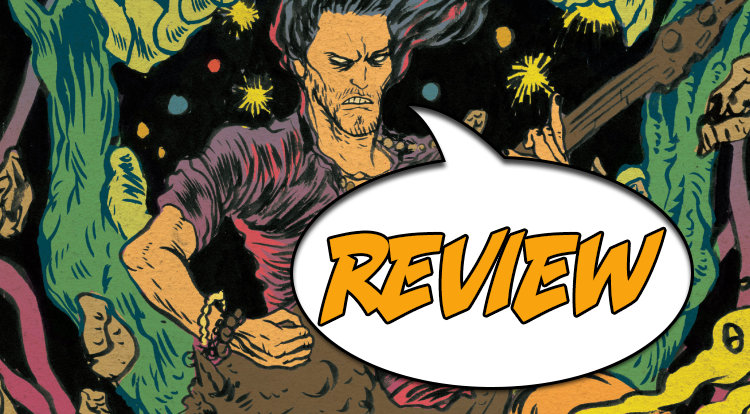 The end of a series starring Loki that is large in scale and adequate in execution. As readers have come to expect from Loki in both this series and Marvel’s representation of the character the God of Mischief and Lies spends most of his time in Loki Ragnarok and Roll #4 on a mission from the All-Father, though not quite executing it to his full potential. The first page of Loki Ragnarok and Roll #4 opens with Loki ruining a concert for the Los Angeles Scene Kids he has met throughout the run. There is blood and things get a little too metal.

David and his Scene kids are unimpressed with Loki’s violent slaughter of their attackers (held over from the events of the third issue), and immediately demand that the titular character cease his wanton destruction. When they angrily confront their divine friend with his behaviour Loki responds by telling the sad tale of how messed up his family back in Asgard made him. While this is certainly a truism readers will recognize from mythology, it also speaks the terminal uniqueness felt by all teenagers and their tendencies to blame all problems on their parents. Somehow, by marrying these two things, Eric M. Esquivel tells a fun story.

Loki Ragnarok and Roll #4 proceeds with Loki twirling Odin’s severed head around on his finger like a basketball and attempting to bribe back David’s friendship with offers of any wish granted via his unlimited powers. All offerings are rejected and Loki is left with no other course of action save an actual show of strength. So, of course, he brings Odin back to life! Huzzah …

… and while he’s at it a few other people as well. Including his brother Thor: God of Thunder.

The act of bringing so many of the fallen back to life strips Loki of his powers and leaves the Laufeyson mortal in the final pages of Loki Ragnarok and Roll #4. Loki’s sacrifice of his divinity and immortality not only protects fragile Midgard from attack by any of the resurrected beings but allows David, Loki and the Scene Kids close out the series by playing the most amazing gig of their lives.

Esquivel has managed to tell an interesting story with the Norse gods that only sort of feels like he’s playing on the popularity of the Marvel incarnation. His writing in Loki Ragnarok and Roll #4 is good, though often too wordy; in many panels there are more words on the page than art. A subplot that focused more on the relationship between Odin and Loki may have been a good addition to the series as a whole, rather than the quick flashback mentioned above. Additionally, some more restraint and a little less vying for Tom Hiddleston’s popularity would have made Loki Ragnarok and Roll a truly original and impactful story.

Jerry Gaylord’s approach to character design in Loki Ragnarok and Roll #4 is sharp angles. Everybody’s face is pointy, their shoulders and knees come to almost perfect right angles and their hair defies gravity in every possible way … and it actually really works. The aesthetic speaks to the Scene Kid sensibility of trying to look a lot more badass than you actually are.

LOKI IN YOUR LIFE

Loki Ragnarok and Roll #4 is part of a series that is trying to capture younger readers – the tumblr users, for lack of a better term. It succeeds in playing on themes that would appeal to a younger demographic (including the importance of a having a SO UNIQUE focal character), and it doesn’t look half bad. The story is fun and at four issues, if you need more Loki in your life, the run is worth picking up.