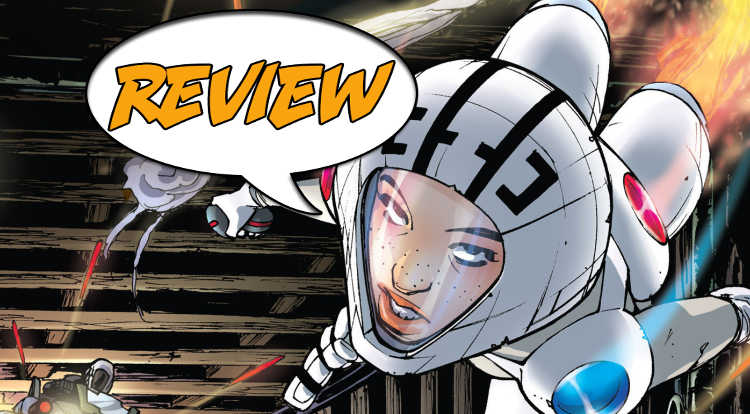 Dayoung (a.k.a. Rocket Girl), spends this entire issue fleeing from a pair of Quintum Mechanics enforcers who’ve followed her back to 1986 from 2013. Meanwhile, in the place she came from, her commissioner and former partner have Dayoung’s back in every way possible, even if it means trying to take down QM by themselves. Our heroine New York teen cop from the future (a.k.a. 2013 … a.k.a. the past in the narrative sense …), Dayoung spends the majority of Rocket Girl #7 leading two other time travelers on a chase through the New York City subway system of 1986. Readers may remember her two pursuers as the guards who knocked her out and threw her into the time machine of the previous issue. The mystery that shrouds these two men remains, but for now the lack of information does not seem problematic. I know that doesn’t sound exciting, but Brandon Montclare peppers the chase with Dayoung’s inner monologue and it is a nice (if sobering), reminder that the fate of this entire world lies on the shoulders of a teenaged girl who doesn’t always know what she is doing. However, we also get to see Dayoung thinking creatively on her feet – including not flying headlong into an oncoming train.

Meanwhile, in the 2013 of Dayoung’s past (yeah … it’s a little bit timey wimey), Leshawn O’Patrick (her former partner), and their 13-year-old commissioner boss hit up a local bar to drown their sorrows post-incident at Quintum Mechanics. As with so many other traits, the commissioner is a hard drinker who just wants to unload all his concerns on the nearest available ear. He’s an old man in a 13-year-old body and it is never not funny. (Sorry for the doubt negative) Leshawn is less concerned with unloading his guilty consciousness and far more sober at the realization of how his world has shifted in light of Dayoung’s time hopping. With the help of the commissioner Lewshawn ultimately decides that the best course of action he can undertake in the world as he presently knows it is to go to work in the morning, keep putting one foot in front of the other and fight for what he and his former partner believe in.

Annie and the crew of young scientists responsible for the incident at Quintum Mechanics that facilitated Dayoung’s future and her ability to travel through time ignore direct orders from their wayward Rocket Girl and return to their place of employment to try and do the best they can to clean up whatever mess they may find. While, from a reader perspective, this is certainly an annoying revelation, it’s difficult to blame someone in their mid-twenties from ignoring the orders of a teenager. Right?

The plot of Rocket Girl #4 is simple and not terribly revelatory, but Brandon Montclare puts a solid story on the page told in an interesting way with dynamic characters. Each issue in the run has been fun in the style of Back to the Future and other well-loved 80s movies while managing to tell a compelling story about a badass female lead!

I love a good splash page. I love a good two page spread. Amy Reeder has beautiful aesthetic that deserves all the play it can get across the pages of Rocket Girl #7. It adds to the sci fi magic and Reeder visually separates the two time periods in a way that is both interesting and seamless. This issue, however, has four two page spreads. Each is gorgeous and bright and filled with action, but it almost feels like too much. I read this book in digital format which often made the flow of the story across the double page spreads difficult to follow; particularly when laid out back to back.

In this age of comic books I think it is paramount that artists consider how their product will play out in hardcopy and on the screen and this is the major issue I have with Rocket Girl #4. At the end of the day it doesn’t matter how wonderful Dayoung looks in her slick Eve-esque flight suit zipping through the subterranean tunnels of New York City if the reader struggles with the story this is supposed to tell.

That being said, Reeder knows what she is doing with character design and world building and her art is a joy to behold – even if one might find it confusing from time to time in Rocket Girl #4.

Rocket Girl #4 is a simple story told masterfully with a strong female narrative voice paired with visually stimulating art, although the pricepoint of $3.50 is a little steep for 22 pages. The story deserves to be read and this issue is a fun one!