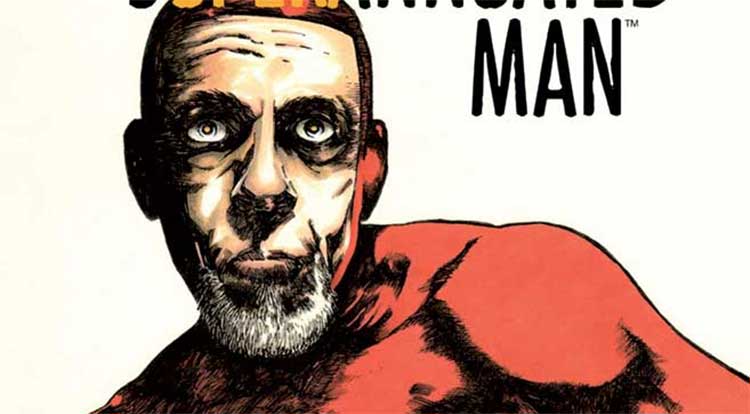 Ted McKeever (MINIATURE JESUS, Metropol) introduces a chilling dystopia in THE SUPERANNUATED MAN, the first of a six-issue miniseries from Shadowline.

By the time most people realized it, they were no longer in charge of the world we know. In an unspecified future, the small seaside town of Blackwater has now been taken over by advanced and mutated animals. Most of the humans that lived there are now either dead or gone, but one old man remains—a man called HE—who scavenges off the scraps and refuse of humanity’s past on the outskirts of Blackwater, and doggedly defies the new tenants.

HE lives a life of solitude in Blackwater is a seaside town bordered by a carbon sea of inky blackness, and populated by animals that have been mutated for reasons connected to the sea. “But it’s the animals who are threatened by something they do not understand completely. And for years, there has been a growing inferiority tone of indifference and distrust towards him because of his aloof and self-sustaining ‘humanity,’” revealed McKeever. “He is the unknown. An outsider who refuses to join in. He will not conform to their rules. And what they can’t understand, or bend to their ways, they will crush.”