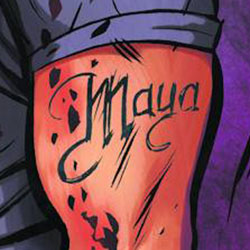 It’s finally here! The universe hopping adventures of Dr. Robert Johnson come to a close with an explosive reveal you may have to read a couple of times to believe. Jeff Smith’s journey with RASL wraps and Major Spoilers has the review after the jump!

Previously in RASL: Sal has given Rob an ultimatum, give him the lost Tesla journals or die. But Rob has the upper hand, and with the St. George Array set to fire – presumably to destroy the hidden journals, Rob manages to make it back to Uma’s universe, find her and flee to the dessert.

ROMANCE AT THE SPEED OF LIGHT

Jumping back and forth between worlds has taken a lot out of Rob, but fortunately he has the mystery girl, or god as she has been called, to protect him, or to warn him as readers will find out in this issue. Sal manages to escape and track down Rob and Uma,  and in a brutal fight to the death, the little girl appears again, and again to confuse Sal and give Rob the chance he needs to finish Sal off once and for all.

I really like Sal as the bad guy, whether he is driven through some religious belief or simply firm in his belief in how the world works, I love how Jeff Smith takes the character and has him chew the scenery like an uber-villain from an ‘80s action movie. The character is well developed, and his demise is justified, and one can’t help be be glad he’s gone for good. But Sal is not the Big Bad, and never has been the one pulling the strings, and the final reveal did catch me off guard; though in hindsight, the Big Bad’s identity is telegraphed time and time again, and credit once again goes to Mr. Smith for teasing readers through to the big reveal without giving it away completely until the mask comes off.

During the final showdown (and countdown), Mr. Smith once again shows Rob to be more resourceful than readers may have given him credit when the series began oh so long ago. It’s great that Rob followed through on his promise to destroy Tesla’s journals, and I really love the twist presented in the final two pages. Though this is a finite series, there may just be something Mr. Smith can do to bring us more RASL.

For 15 issues, Jeff Smith has woven a tale of danger and mystery, and wrapped it in a sci-fi shell that satisfies on every level. Even in this final issue, the story builds and serves up moments that make the reader pay closer attention to everything that has come before. From the story perspective, there is nothing disappointing to be found in this issue.

While I like Mr. Smith’s art style, there is still a great deal of inconsistency between panels that bothers me. While Sal, Uma, the little girl, and others tend to have a consistent look, Rob’s face changes a lot from one moment to the next. The inconsistencies aren’t that big, but once you see it, it is hard to not notice it every time. Smith also doesn’t do a lot of shading, so even when it is the middle of the night, it still looks like daytime, with the sun at the twelve o’clock position. That being said, I get so wrapped up on the story that these art issues are not as problematic when looking at the book as a whole.

RASL has been on of the books I got excited about with each release, and though it’s been four years since the first book arrived, this series has been an excellent ride. The finale is handled well, and though I wonder if subsequent reads will prove as mysterious, RASL #15 is a must buy book. You can still find the previous collected volumes on the shelves, or if you are a digital comic reader, the first 13 issues can be found via comiXology. RASL #15 featured an epic ending to an epic story and earns 4 out of 5 Stars.