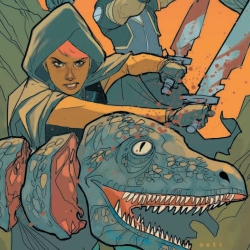 Dinosaurs, alternate universes, and dopplegangers, oh my! Major Spoilers takes a look at Higher Earth #3 and lets you know if the premise holds up!

Previously, in Higher Earth: Rex and Heidi are being chased across timelines and versions of Earth, but they don’t stay too long on any one, as an army comprised of the men of many Earths is after them. Now they’ve landed on an Earth where the cataclysmic extinction event never happened, and dinosaurs are still the dominant life forms.

I initially picked this issue to review based on the beautiful Phil Noto variant cover; it caught my eye enough for me to read the solicitation, and the prospect of a sci-fi adventure story combined with dinosaurs sounded interesting enough to review. It opens up with a large T-Rex-like dinosaur (I’m sure Rodrigo would know the actual name, assuming it’s a real dino) vomiting up his guts, apparently dying of pain from some bio-spore infection that is discussed and then ignored for the most part through the rest of the issue. That moment serves as a catalyst for an interesting character moment with Heidi; as the dinosaur is in its death throes and arguably at its most dangerous point, she leaps in and puts the predator out of its misery, much to Rex’s chagrin.

One of the biggest problems in this issue is how much it jumps around. We never spend more than two or three pages in the same spot, and the transitions are particularly jarring. I think the reason for it is Sam Humphries trying to tell a large story in a small space, and while I commonly rant against the evils of decompressed storytelling, this book could actually stand a bit of decompression. Rather than dealing with an entire Earth in one issue it might be better to stretch each one out to two issues so we can see the universe fleshed out.

Not having read the previous issues. I don’t know how much of Rex’s backstory has been established, but there’s a big reveal that a villain that shows up is him from another Earth. The reveal is built up to be a big deal in this issue, but it’s telegraphed so clearly that I had it called as soon as the character appeared in a flurry of tachyons. The last-page reveal is of a similarly predictable caliber.

The art in this issue is beautiful, reminiscent of Amanda Conner at times, with the exception of eyes. I’m not familiar with Francesco Biagini, but the combination of his pencils with the typical BOOM! Studios heavily-inked house style. The tiger-striping of the initial dinosaur is really engaging, and the female lead has a phenomenal range of expression.

BOTTOM LINE: PRETTY, BUT NOT ALL THERE

This issue tries to do a lot, but unfortunately just sort of stumbles to the finish line that is the last page reveal. The art is great, and I’m going to go back and read the first two issues to see if maybe there were some callbacks to previous issues that I missed. The major revelations of the issue were all incredibly predictable, and the pacing was really sporadic. It’s not all bad, however; this is a series with potential, and I’d like to see where it goes. On the merits of the art, this issue gets three stars out of five.