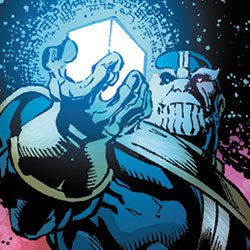 Marvel is teasing readers with a new image of Thanos holding the Cosmic Cube.

AVENGERS ASSEMBLE #7 (JUL120551)
Written by BRIAN MICHAEL BENDIS
Pencils and Cover by MARK BAGLEY
With the Mad Titan, Thanos, out of the reach from Earth’s Mightiest – his quest for power and domination over the Marvel Universe continues in Avengers Assemble #7! But the Avengers won’t go down without a fight, and courtesy of Brian Michael Bendis and Mark Bagley, they’re bringing the Guardians of the Galaxy with them! But can even their combined strength defeat Thanos with a cosmic cube in his possession?