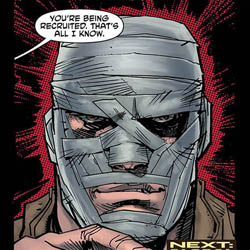 Or – “At Least They’re Committed To Multiple Genres…”

Many people (including Major Spoilers’ own Stephen) have been voicing dissatisfaction with the proliferation of superhero titles on the stands, though it’s hardly a new issue.  I recall the same complaints abounding when I began reading comics back in the early 1980s, and I find it admirable that DC’s New 52 relaunches included a western, a couple of sorta-war titles as well as books aimed at younger readers.  Of course, one of those kinda sorta war titles went down with issue #8, but now we get to see what they’ve crafted to replace it…

Previously, in G.I. Combat:  DC Comics has a long tradition of war comics (Men Of War, the predecessor to this book, was a relaunch of All American Men Of War, which launched in 1956 or so) but the G.I. Combat series was actually originally launched by Quality Comics in the early 1950’s.  DC (or at least National Periodical Publications) acquired the rights to Quality’s books, they kept G.I.C. running, launching properties like The Haunted Tank, The Losers and The Mercenaries.  Also, I think there was something about a ninja…  Either way, it’s a new DC Universe, but some things never change.

THE WAR THAT TIME FORGOT!

I hope Rodrigo is paying attention to the return of this particular franchise, as dinosaurs versus machine guns sounds like something at least adjacent to his wheelhouse.  We meet a young soldier, somewhere in the Sea of Japan, as he sends a video letter home to his wife and adorable daughter.  We meet his gung-ho partner, then are pretty much thrown full-on into battle between a helicopter and a pteranodon. (Or is it pteradactyl?  One or the other doesn’t exist anymore, like the Brontosaurus and planet Pluto, but I can’t remember which.)   Ariel Olivetti delivers some lovely art, albeit a bit computerized looking (several of the backgrounds look to be photographs digitally composited into the drawings) but the story and dialogue really never make it anywhere past serviceable.  Our soldier heroes make it to the ground in one piece, only to make like Turok and end up in an uncanny valley (not THAT Uncanny Valley) where dinosaurs, planes and vintage tanks fight what seems to be an endless time-twisted war of attrition.

Of course, where the first half of the issue looks amazing and read just so-so, the second half quickly inverts the equation. With art that it equal parts scratchy and muddy, Dan Panosian’s visuals don’t do Unknown Soldier writing team of Palmiotti and Gray and favors.  They give us a nice thumbnail sketch of the origins of the new Unknown Soldier, a story that is only marred by the utter familiarity of it’s middle-east war-on-terror setting and the extremely recent Vertigo Unknown Soldier series.  P&G deliver some interesting dialogue, but ultimately the shopworn elements of plot and setting weight the whole thing down, and the issue ending revelation that the government is recruiting the Unknown Soldier for black ops work isn’t really all that much of a cliffhanger, given that it’s always been part of that character’s 45 year history.  Still, I found much entertainment in the thought that the artist from the first story and the writers of the second should get together, and they might have something going for them…

THE VERDICT: A MIXED BAG OF MAYHEM AND CARAMELS.

The uneven nature of this issue is a real deal-breaker for me, as I wasn’t particularly enamored with Men of War’s resurrection of Sgt. Rock and “Oooh!  Navy SEALS!” in the first place.  I kind of enjoy Ariel Olivetti’s work, but there’s a stiffness to it that is a little off-putting.  Still, the dinosaurs look great, and the unique color palette gives the “War That Time Forgot” story a nicely alien feel to it’s alien setting.  The flip-side comes with the Unknown Soldier’s far-too-familiar storytelling, which creates the unpleasant experience of having to choose the Lady or the Tiger in my comic book.  G.I. Combat #1 continues an old tradition of DC war comics, but doesn’t quite hit the mark with this one, delivering two fragmented tales that fail to gel in different ways, earning 2 out of 5 stars overall.  It’s not a BAD start, just a halting one, and I hope that these non-superhero properties don’t just fade away due to their lack of capes and tights…