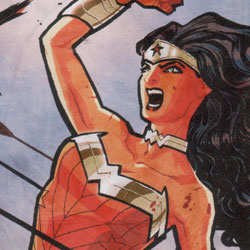 We all know that Wonder Woman was made of clay by her mother Hippolyta, and grew up with the rest of the Amazons.  DC figures it is time to change that by giving Diana a father.

When it comes to Greek mythology, it shouldn’t come as a big surprise that Zeus is being named as the father – which makes sense; Zeus got around… a lot.

According to DC Comics, Wonder Woman won’t find out about her father until Wonder Woman #3 that arrives next month from the company.  Of course, if you are at this weekend’s New York Comic Con, chances are you are going to get much more information from Jim Lee, Dan DiDio and others.

“There are going to be some family issues,” writer Brian Azzarello said, referring to the Olympians as “the original crime family.”

According to Lee, this is all part of updating the characters to feel true to their origins by “thoroughly modern.”

For now, we’ll leave it at that and see what the Intardwebz has to say.