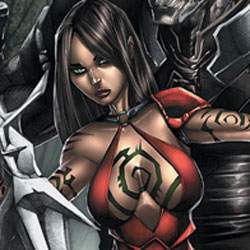 BOOM! announces Outcast #1 for only a buck

Special 1-in-200 Joe Jusko variant cover which will be only offered slabbed by CGG with a 9.8 Grade.

“Fans of Game of Thrones and Conan shouldn’t miss this action-packed #1 issue. OUTCAST blends the best of zombies, magic and vengeance,” says BOOM! Studios Editor-in-Chief Matt Gagnon.  “Michael Alan Nelson and Matteo Scalera push a man over the brink, both visually and psychologically, to bring you an undead anti-hero worth reading.”

“You can’t refuse the full first issue priced at only $1! This is a steal. Who could want more with such insane action paired with an equally insane price,” says BOOM! Studios Founder and Chief Executive Officer Ross Richie. “This zombie king is ready to hack his way to vengeance in this savage world.”

OUTCAST tells the story of King Valen Brand. He was a just king and a great warrior until he was killed by a Necromancer in battle and resurrected as one of the walking dead. Now he’s considered an abomination in his own realm, an outcast with only one purpose: to restore his lost soul…

OUTCAST #1 is written by Michael Alan Nelson (28 DAYS LATER, ROBERT E. HOWARD’S HAWKS OF OUTREMER) with art by Matteo Scalera (DEADPOOL CORPS). This title ships in December with eight covers in a 30/30/30/10 split by Liam Sharp, Cary Nord, Alé Garza and Trevor Hairsine, a 1-in-25 incentive by Chad Hardin, a 1-in50 incentive by Trevor Hairsine, a 1-in75 incentive by Alé Garza, and a special 1-in 200 Joe Jusko variant Cover which will be offered slabbed by CGG with a 9.8 Grade. Featuring 22-pages of story and carrying a price point of $1.00 with a Diamond Code of OCT110899.