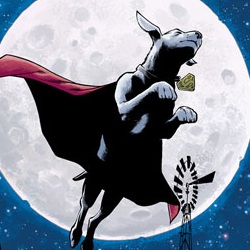 Spinning out of the events of Infinite Crisis…  Wait a minute. Wasn’t that from like, five years ago? Yes,  faithful Spoilerites, DC Comics is finally telling the tale of what Krypto the super-dog was up to during Infinite Crisis. Take the jump and see if a story that languished in limbo for half a decade earns a spot in your read pile… Previously, in Superman: After Tom Welling-Prime punched the walls of reality (which undid the Death of Jason Todd, amongst other things) he fought the current Superboy, aka Kon-El. During this fight Krypto was smacked down, and hurt. Though it’s many years later Krypto’s story is finally being told.

After being hurt by his master’s doppelganger, Krypto has slipped into depression since his master is off to save the world yet again. As Krypto reminisces on the good times that have gone past, even a Kryptonian’s Best Friend knows the pain of loss.

For being a tale told from a super powered dog’s perspective, it’s not that bad. But it’s sadly too little, too late. The story itself is quite good, in a basic way. Which means it was a very quick read. But Busiek has always been able to infuse these unrealistic characters with a emotional range that effected me.

This story was sad. It was the tale of a dog missing his master who (SPOILER ALERT!) was killed in Infinite Crisis, and later brought back from the dead in Final Crisis: Legion of 3 Worlds. This tale would have been much more timely if it was released during Infinite Crisis, but now just comes off as DC Editorial cleaning out all their backlog of unpublished works.

The issues pencils were provided by Rick Leonardi, and the inks were by Jonathan Sibal. I wish I could say these two were a perfect match, but that is sadly not the case. Krypto’s consistency from page to page is totally out of whack, there are times that Krypto resembles a blob rather than a white Dalmatian.

The bipedal characters don’t fair much better. The scenes which feature Superboy, Wondergirl, Nightwing, The Kents, and Superman are all a off. No amount of color can save such weak line structure, and there is a lot of weakness in this particular comics art. That rushed look pushes past acceptable limits, and becomes downright unbearable to look at as the issue chugs along at a very brisk pace.

THE VERDICT: BAD ART CAN KILL

This is a fill-in book. There was another Superman #712 that was going to be a part of the notorious “Grounded” arc that was to feature a Los Angeles based Muslim superhero named “Sharif”, but for one reason or another this “Krypto” issue was put into the rotation relatively at a moments notice. This book is more than 5 years out of context, having been designed to take place during Infinite Crisis, but for editorial reasons it was shelved. The artwork is sub par, and really should not have been published if this was the final product. If this was a rush job that needed to be done in a hurry, than this is one of the worst ones I have seen in a long while.

In the end, this “Lost” Krypto tale failed to deliver. If it was 2006, I may have felt different. But just like putting a cake in the freezer for a few years, and expecting it to taste good. You are only going to be let down like I was for this issue. In closing, Superman #712 receives 2 Stars, out of 5.