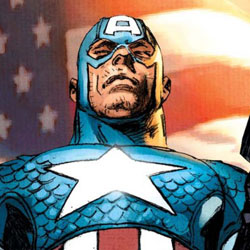 “You think yourself a real hero, don’t you Rogers? You don’t even realize how much the rest of the world despises you, don’t realize, or don’t care.” Those are mighty strong words to say to a man juiced up on Super Soldier Serum. Of course it doesn’t hurt that the one issuing the diatribe also wears an American Flag. Captain America, meet Captain America. Previously in Captain America: The year is 1942, and the U.S. Military launches a secret experiment to create a super soldier. In a mission gone wrong, Captain Steve Rogers is frozen in ice. He is eventually found and brought back 50 years later.

The problem with creating a super soldier is everyone is going to want one for their birthday. The one thing that keeps the collector value for the original super soldiers at an all time high is that the death of Dr. Erskine has kept the exact formula lost for decades. That doesn’t mean other super soldiers haven’t been created in the Ultimate Marvel Universe… heck, even North Korea is getting in on the act, with a little help from a masked American.

As with any secret activity, chances are some spook agency is going to know about it, and it’s up to MI5 and Captain America (under the supervision of Carol Danvers) to break into the facility, snag the soldier and the serum, and the get out before war breaks out. Unfortunately, the masked American helping the North Koreans seems to be juiced up himself, which eventually leads to a one on one confrontation between Captain America and the unknown assailant.

If you’ve read the Marvel 616 universe for any time, you know that there is one super soldier that went rogue (thanks Frank Miller), and the final page reveal that Frank Simpson is giving aid to the enemy is not totally surprising.

What makes this story interesting is Frank isn’t wacky-in-the-wicky-woo – in fact he spends most of his face time yelling at Rogers on why the rest of the world hates America, god, and just about everything else that many in this country hold so dear, all while beating Rogers to a bloody pulp and escaping into wild.

At this point, the issue reads pretty much like any first act of an action hero movie involving military personnel, and I don’t fault Aaron for following, what I perceive to be a generic setup. The end reveal is nice, though the act of getting there is filled with tropes. I hope the following issues become more psychological in nature, with a little action thrown in. The Intardwebz is rife with speculation that Ultimate Comics is coming to an end, and if Rogers goes out disillusioned or needs to spend some time walking across the country to discover what America really is as the universe goes dark, I’m okay with that.

The Garney art in this issue is really good. And by really good, I mean it doesn’t suck like many other issues I’ve had the displeasure of reading this past week. Garney has a firm grasp on layout and composition, he can draw the human figure (though sometimes muscles seem a little out of control), and he can draw action that brings excitement to the page. It’s good art, and I like it.

If you’re a fan of the Ultimate Universe, and like what Millar and Bendis have done with Captain America, this issue is worth checking out. There are plenty of tropes to go around, which might be a put off, and the art is okay, earning this issue 3 out of 5 Stars.