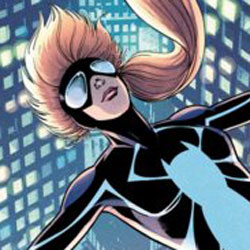 Spider-Girl #1 debuts Anya Sofia Corazon (formerly Araña) with a brand new costume and codename, and starts the young super-heroine off on the right foot. I had little foreknowledge of Anya’s exploits, but thoroughly enjoyed the issue nonetheless. Paul Tobin packs the issue full of action, but allows plenty of time to fully explore Anya’s personality, while setting up an interesting relationship with her father.

Anya is a character that represents a rare opportunity to introduce a new superhero on her own terms. The set-up is similar to the classic depiction of Peter Parker. She feels alienated from her fellow students, struggling to balance super-heroics with school work. Anya is mature, but that leaves her at a loss with her fellow teens. She is brave in the face of danger, cracking wise just like that other arachnid hero. But her differences are more than superficial. Anya’s father is refreshingly aware of her alter-ego, meaning there won’t be any of the tension Peter had with Aunt May with all the prerequisite alter-ego juggling. Her depowered status leaves her mostly tangling with street-level thugs in this issue, but that’s soon about to change. Spider-Girl fits right in the Spider-Man tradition, by showcasing a fun (yet conflicted) character that’s probably relatable to most readers.
Clayton Henry’s art is in the classic Marvel superhero style, and it stands out as a fairly exemplary example thereof. His characters’ faces are expressive, the action is clear and Chris Sotomayor’s colors are appropriately bright. Henry doesn’t skimp on the backgrounds, illustrating a fully-realized world with clean lines without resorting to photorealism. His style isn’t overly showy, but exhibits a high level of competence that would plug in nicely with most superhero books.

The main story is bolstered by a back-up comic that gives some background to Anya and her father’s relationship with the Fantastic Four. It’s funny, it’s sweet, and unlike a lot of back-up strips, it’s meaningful. It emphasizes Anya’s pluck, and explains her familial connections to the Fantastic Four. Tobin scripts this one too, although the art is handled by Dean Haspiel. His cartoony style suits the younger age of the protagonist, and he draws a mean Thing.

The only complaint I have with this book is the much advertised Twitter connection. Writing teenagers is a challenge for most writers who are well out of their adolescence. There’s a tendency to force the teenaged slang, which makes most comic book teens sound like idiots. Look no further than Stan Lee’s dialogue in the original Spider-Man books for hilariously awesome examples of this. Tobin mostly avoids this, but replacing her internal monologue with tweets comes off more as a goofy affectation than genuine. The idea of a superhero pausing mid-fight to bang out 140 characters on their smartphone is a little disturbing. To boot, Anya is only once actually shown whipping out a phone, so it’s not clear when all this twittering is actually happening.

Spider-Girl #1 is a strong debut, setting up the sort of classic heroics that Marvel Comics has been somewhat lacking of late. It harkens back to the original Spider-Man setup without being overly derivative, and provides all the action, emotion and humor readers of all ages could want out of a comic book. It’s just good, clean superhero fun, with organic relationships and relatable characters. It also has some of the best sound effects I’ve seen of late. The full list consists of: 2 beeeeeedeeeeeps, 2 knocks, whattooooom, kraakooooomm, whummppff, whumppff, krakkkk, yannkk, shunnk, krakkk, punktt, whoooooompff, clikkt, , fwuumpppt, ka-chink, thwakkkkt, and a kluumpppp. Spider-Girl #1 has twenty-one tweets, six pigeons, two face punches, two automobile break-ins, one attempted jewel heist, one attempted art theft, one purse-snatching, one car-jacking and one library destruction. Four and a half out of five stars. Check it out.