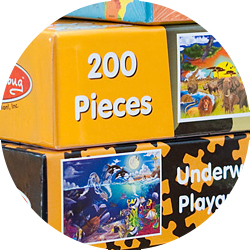 I have a very organic approach to my role-playing games. As I run games for people and play in other people’s games I simply incorporate things that work into my style and eliminate things that don’t. One of the many options available to game masters that I have always ignored are puzzles. Really it wasn’t until a recent comment from a Critical Hit listener that I stopped to consider why this time-honored game mastering option never worked its way into my lexicon. And it wasn’t until a couple of days ago that I managed to put my finger on it: Puzzles discourage role-playing.

First off let’s define puzzles and their verbal subset, riddles:

Merriam-Webster’s online dictionary defines a puzzle as “a question, problem, or contrivance designed for testing ingenuity“. In role-playing game terms a puzzle is a challenge that requires the players to decipher a predetermined solution, usually without rolling dice or role-playing to find an alternative. If your character comes across a complex polydirectional locking mechanism and your game master allows you to roll wits+enigmas to solve it, you did not just solve a puzzle. If instead your game master presents you with a riddle that you must figure out and answer, you are staring down the barrel of a puzzle. Clear? No? Well, read it again, I don’t have all day.

So why do puzzles discourage role-playing? It’s not necessarily obvious, but puzzles have four(ish) interconnected aspects that make them disruptive

1.  A Puzzle Must Be Solved Out-of-Game First

Let’s go back to riddles:

a stone mask glares down at you from the wall, as it begins to speak its eyes glow a baleful green. “In order to pass you must answer me this riddle! The more you take away the bigger I become, until the last is taken and then I am undone.”

Cool right? So what happens then? Well if you’re like most players you simply stroke your chin and try to figure out what the answer to the puzzle is (assuming you don’t already know it, more on that later) but are you doing that in character? No, probably not. It is very difficult to solve a puzzle “in character” because your mind automatically wants to solve the problem and will access all relevant information stored in your braindrive. This includes all your non-game experiences, which your character doesn’t have. Meeting with a challenge that exists simultaneously inside and outside the game causes the player to make a decision as to whether he or she will figure it out in- or out-of-character, and the decision will almost always be the easiest alternative, out-of-character. This leads directly into the second problem.

2.  Puzzles Discourage Being in Character

Let’s say that you decide to approach the puzzle from your character’s perspective, you then have to answer a series of questions:

Forgetting for a second that if the answer to the first and second questions are “yes” the flowchart leads you back to problem 1, let’s talk about potential strain on the character by setting up some examples.

Katie is smart enough to solve the puzzle, but she feels that her character, Sally J, is not. This causes strain on her because although she may have figured out the answer, she must decide whether her character would be able to.

Brent is not a ‘puzzle-solving type’ but his character, Dr. Pacheco definitely is. This causes strain on him because, even though in-character he should be able to solve the puzzle he, as a player is unable to.

So what do they do then? Spend some time reconciling why one character came up with something and the other one didn’t? That works, but if it requires you to stop play and figure out why something is happening, is it the sort of situation you want in your game? Should Katie just tell Brent the answer and have Dr. Pacheco answer in character? It’s an option, but does that reduce Katie’s accomplishment? Should we just say, “well someone got it, let’s move on”? That would certainly de-emphasize that awesome glowing stone mask, wouldn’t it?

Amazingly though, games are set up to deal exactly with this kind of situation which leads me to the next problem.

3.  Everything Else Can Be Solved Through Role-Playing or Dice Rolls Except for Puzzles.

If they weren’t dealing with an actual riddle then Katie could roll her abysmal Int+Puzzlesolve score and Brent could roll with his +27 bonus and get results that made a lot more sense for their characters. But there’s no point in setting up an awesome scene, roll once and have the GM tell you “Turns out the answer’s a hole’.” And that’s the problem, every other issue in an RPG can be resolved either through role-playing (and usually finding an alternative route through role-playing) or by relying on the game’s own system for conflict resolution. Not so with a puzzle.

Granted, part of the role-playing experience is that give-and-take between GM and players, but when you introduce an element that exists outside and inside the game, the mix becomes somewhat unstable. Here’s a similar situation: You know that guy in your gaming group who knows more about the setting than the GM? You know how sometimes he uses that information to make the game go the way he wants? I and other awesome Internet gaming columnists have devoted millions of words to dealing with that guy. So why would you want to create a situation like that? When you introduce a puzzle into a game, chances are one of your nerds has seen one like it. So what do you do if the players are already familiar with that style of (or even that specific) puzzle? Assuming you don’t care about the previous issues what happens when your cleric just grabs the puzzlebox and traps the demon in it before it can even start gloating? You move on, most likely.

So what happens if the opposite is true? What if none of your players can solve the puzzle, and they just sit there for an hour staring at each other until one of them finally says “can we just roll for it?” Do you let them? Do you rationalize why it’s OK for you to give them a hint? Or why one of them should probably be able to figure out the answer? Once again you’re in a situation where you’re having to stop your game in order to figure out the result of a scene, and if you’re doing that then no one’s in character, and if no one’s in character, what’s the point?

Now, I have had discussions about puzzles before my big epiphany, I’ve never been a big fan of them so I always bad-mouthed them to other gamers, and here are some of their arguments.

But puzzles are fun!
And so is riding a bike, but usually we don’t incorporate that into our games because it’s hard to ride a bike in character.

You didn’t talk about Kevin, who is good at puzzles and plays Thomas, who is also good at puzzles!
You’re right, but in my experience every group has a Kevin, a Katie and a Brent. A game should allow its players to play characters that are not like them. A puzzle-heavy game encourages the opposite.

You’re taking this too seriously!
I am, grrr, RPGs are the most important thing in the universe! Seriously though, think about the game you enjoy the most, RPG or otherwise. You know why that game is as much fun as it is? Because someone at some point began to take it seriously.

In the end my beef with puzzles boils down to the fact that even at their smoothest there tends to be some amount of reconciling or ignoring that needs to be done. And there’s no point in having an element in your game that, by design, disrupts the narrative.