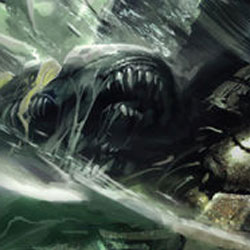 The latest installment of the Aliens vs. Predator franchise has arrived in comic book form, and Dark Horse has released a sneak peek of issue #5 that arrives in stores this week.

Whoever said “War is Hell” didn’t know the half of it. The Colonial Marines and their Predator allies look to take the fight to the enemy Predators and the Alien horde they control — but the daunting numbers of the bug swarm may be more than human and hunter can overcome. Their last hope may lie in the synthetic hands of the android David Sereda, who discovers the enemy’s bug hatchery and a secret that may stem the deadly Alien tide — if he can survive long enough to tell the tale!

The book arrives in stores on Wednesday, and features a cover price of $3.50.