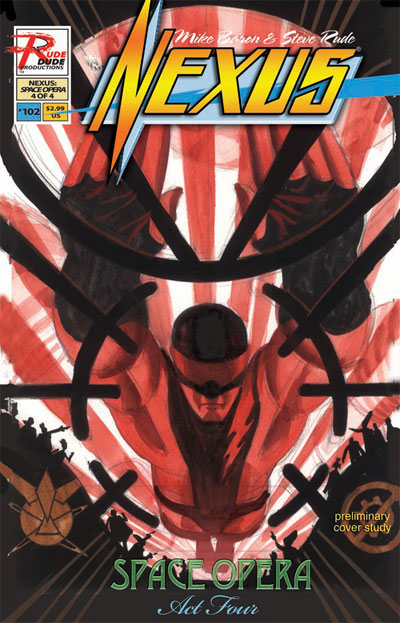 Combined into one, double-sized colossal issue, Nexus 101 and 102 will togetherÂ  bring our series “Soap Opera” to its final conclusion.Â  Publisher Steve Rude says, “Considering the inordinate expanse of time that has passed since the release of our last issue, fans expectations will be singularly high.Â  Let’s see if Baron and Rude can deliver the final goods.”

Both issues are done through color so the release is on schedule and on time!!

Synopsis:
Nexus 101: “The Past Swung Up and Hit Me Like a Rake” will leave you breathless.Â  Can it really be Kreed, the most lethal Quatro of all time?Â  But how?Â  He killed himself!Â  The answer will blow your mind.Â  The situation with the Elvonics is at boiling point.Â  Elvon Supreme leads the greatest fleet ever launched on Ylum.Â  Nexus travels to Earth to address the United Planets.Â  His speech is not well received.Â  Ylum will be embargoed, if it survives Elvon’s assault force.Â  Old friends return, and old enemies, in the most shocking climax of any comic this year.

Nexus 102: “A Death in the Family” Ylum stand isolated and condemned by the United Web as the greatest invasion force in history draws near.Â  In one of the most shocking episode in Nexus’ long history, Sundra defends her child from a merciless foe – a foe who was once Sundra’s best friend.Â  Nexus must choose between saving his planet and suffering universal condemnation or obeying the will of the web.Â  Nexus 102 will pummel you with anxiety fits, too weak to even call 911!