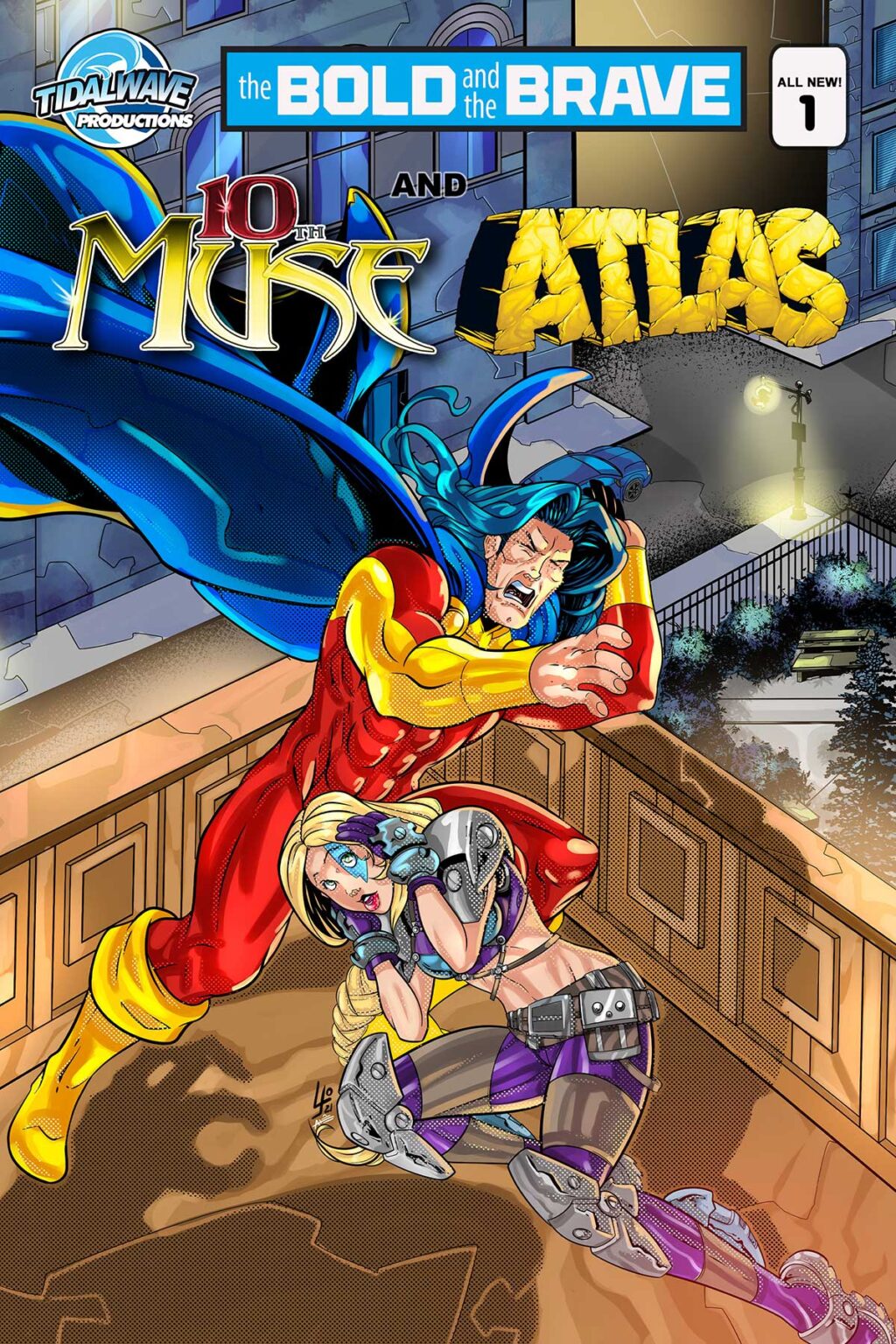 TidalWave Comics has released the cover images and solicitation information for titles arriving in November 2021.

Ares’ team of misfits has liberated Pandora’s Box from billionaire entrepreneur Grayson Bishop. In doing so, she’s caught the attention of Aphrodite, who assembles the heroes and heroines of the TidalWave Universe to convince Ares to cease her war against the Earth. Athena, Atlas, 10th Muse, and Red Muse stand united! With the appearance of Aphrodite on Earth, will this be enough to dissuade Ares? The Bold and the Brave #1

A new unique team-up ongoing series! A quiet day in San Francisco is interrupted when one of the city’s heroes begins to run amok. The 10th Muse swoops in to investigate his strange behavior and the answer may just be a link to her past. A gift is placed in the Muse’s possession, a gift that will change her fate forever and the lives of many. Guest starring Atlas from Image Comics! Call of the Siren

Sixteen-year-old Abigail Gray lives in Homer, Alaska, with her dad, Archie Gray. Archie is a fisherman. Abbie’s best friends are Kate Ahlgren and Jace. Melanie Gray, Abbie’s mom, died when she was six. Abbie blames herself for her mother’s death. Hades the greek God, broke into their house when Abbie was young, and Melanie and Abbie hid in a linen closet. Abbie’s mom used to tell Abbie their singing made them strong, so six-year-old Abbie sang. But the song brought the intruder to their hiding place and Abbie’s life will never be the same! From the creator of the “10th Muse” comes a new tale of mythology for an all ages generation! Raised by his widowed mother, young David Copperfield enjoys a wonderful life until she remarries and … wait. What? This isn’t David Copperfield? What is an “Insane Jane?” Really? This is the synopsis? Alright. Let’s see … inmates in an asylum are accused of mayhem and everything leads back to a troubled young woman who knows more than she should. That actually seems rather interesting. Carry on then. Originally published by Image Comics, the 10th Muse was the 6th highest selling book at its release. With scripts written by Marv Wolfman, co-creator of Marvel Comics’ Blade and DC Comics’ New Teen Titans, Cyborg, Raven, Deathstroke, and others, the title saw critical acclaim on top of being a financial success.

Clocking in at over 225 pages, the script is divided by gorgeous art from renowned artists Roger Cruz, Andy Park, and Ken Lashley.

Greek mythology has documented the nine Muses, the inspirational daughters of the almighty god Zeus. But history forgot one—the 10th Muse. Emma Sonnet mysteriously disappeared five years ago during a summer trip to Greece celebrating her graduation from law school. Yesterday, she resurfaced just as mysteriously as the newly appointed District Attorney, with a unique take on the law. Battling evil in the courtroom by day, and in the shadows at night, Emma Sonnet is tipping the scales of justice her way, as the 10th Muse. Billionaire industrialist Grayson Bishop, charming and as deadly as a cobra, will as easily kill a rival as bury them in business. Now his sights are set on the 10th Muse, and he wants her dead in the worst way. Who is the voice of the Grand Old Party? That’s always up for debate. What’s clear is that the Republic Party, the party of Abraham Lincoln, Ronald Reagan, and Donald Trump, favors small government and conservative values.

Together in a special 100-page graphic novel are the illustrated biographies of some of the other contemporary voices.

Dr. Rand Paul is the son of former presidential candidate and “intellectual godfather” of the Tea Party, Ron Paul, and considered in many circles to be one of the most vital voices on the right. Marco Rubio, the small-government conservative from Florida with strong roots in the Cuban American community, was elected to the House of Representatives at the age of 28 and is a significant player in the conservative movement’s future. One of America’s most influential conservative figures, Laura Ingraham was denounced by many early in her career as a bigot because of her deeply held Christian views. She’s a speechwriter, best-selling author, and the host of a radio show listened to by millions.

TidalWave’s POLITICAL POWER line of comics explores the lives of those who give voice to a movement. The series has been showcased worldwide on FOX NEWS CHANNEL, Time Magazine, The National Review, Politico and more! The battle for Mars begins as Sinbad and his army of pirates attack the Imperial City — and terrifying secrets will be revealed! The actors profiled in this graphic novel share one thing in common: They’re unforgettable. Born Marion Mitchell Morrison, his distinct vocal cadence, intimidating physical presence, and signature look made him a box office draw for 30 years. Few actors achieve the level of fame afforded silver screen icon, John Wayne. What makes a man a true hero? Is it the role he plays or the life he leads? Explore the life of legendary actor and philanthropist Christopher Reeve in this tribute to the man behind Superman’s cape. The most influential martial artist of all time, Bruce Lee was an actor, teacher, and now, an icon. Follow Bruce’s life from child actor to his tragic death and posthumous superstardom. The name Vincent Price is synonymous with all things horror. Explore the life of an actor who transcended a genre and became the voice of the darker side of life.

TidalWave’s popular TRIBUTE line tells the stories of famous people who left an indelible impression on our popular culture. L.J. Dopp is an American painter who got his start at TidalWave working on covers for the “Vincent Price Presents” comic book series. This 23-page gallery showcases never before seen images and covers from this artist. Sean Gordon Murphy is an American comic book creator who is known for his work at DC Comics, Dark Horse Comics as well as his creator owned projects. He got his start at TidalWave working on projects such as “Judo Girl” and the award-winning series “Lost Raven”. Murphy also did covers for the TidalWave series “Black Tide”. This 30-page gallery showcases never before seen images and covers from this artist. Vinnie Tartamella is an American comic book artist who got his start drawing for TidalWave Productions doing covers for comic book series “Female Force”, “Tribute” and “The Blackbeard Legacy”. His art has been showcased in mass media such as on CNN, The FOX News Channel and in Time Magazine. Tartamella continues drawing in his own creator owned series. Over 300-pages of sexy girl spies, action, intrigue and espionage in one giant compendium! They say it takes a thief to catch a thief, and the glamorous field agents of Victoria’s Secret Service put this tenant to the test when they allow their newest member, the American sneak-thief Scarlet, to take point on her first full mission. Hoping to derail an imminent coronation, it seems that an unknown scoundrel has stolen the Crown Jewels from the Tower of London! It’s up to Lark, Raven, Brooke, and Scarlet to steal back these vibrant symbols of the monarchy they have sworn to protect. But which of her teammates is spying on Scarlet? And why? It’s thief versus thief and spy versus spy in this high-impact thriller.

All this and guest appearances by the 10th Muse and Gearz. This special edition has never before seen images and character designs from the series. New cover by Marvel comics artist Yonami.