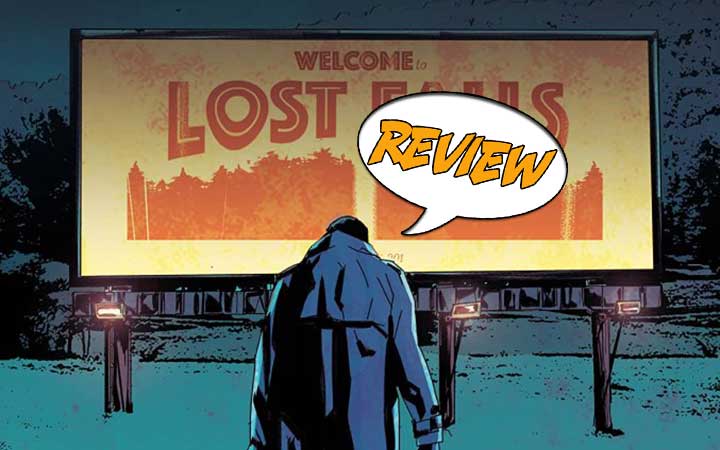 Something strange is going on in Lost Falls, and it seems like none of its inhabitants are going to be spared its impact.  Your Major Spoilers review of  Lost Falls #1, awaits!

Previously on Lost Falls: When Detective Daniel Pynchon wakes up in Lost Falls, on the shore with no recollection of how he got there, he struggles to piece together the events that lead him there.

HALFWAY BETWEEN A DREAM AND A MEMORY

Lost Falls #1 opens with a cryptic message presented by a person with a bouquet of flowers as a head.  Things then transition to Detective Pynchon as he wakes up in Lost Falls.  He’s stopped by the first person he comes across who directs him to a motel in town.  Once there, he’s lured outside again by a young woman.  He follows her, passing by a group a teenagers, once he reaches where the woman is, he’s knocked unconscious.  Things then shift to the group of teenagers the detective passed by.  They drive out to the woods to get some drugs for a party that night.  Elsewhere, a gunman has taken a hostage at a gas station after shooting multiple others.  The cops show up and he begins to speak in riddles, before they shoot him dead. At the party the one of the girls in the group catches her boyfriend, Drake, with another woman.  She takes his car and heads home.  Drake attempts to walk home but along the way he is attacked by a faceless monster.  The next day Detective Pynchon wakes up and finds himself at the scene of a gruesome crime.

From panel one, it’s apparent that there are some David Lynch inspirations going on here.  Riddles, a small town, a hint of supernatural, interwoven stories, all we’re missing is a fondness for a specific dessert, but it’s the first issue, give them time.  All joking aside, Lost Falls #1 is a well-constructed comic book.  It pushes the limit of things going on at one time while remaining coherent, but never crosses it. What’s particular effective here is that while a good portion of this issue is laying down foundations and introducing characters and a tone, it still manages to have its own satisfying rising action, climax, and falling action, just like a good episode of primetime television.  They even manage to slip in a subtle repeating theme here, that being people who have suffered from some sort of memory loss. Also, the way that the events are laid out, partially overlapping and running into each other conveys a sense that things are connected, so while each scene stands on its own, it’s when the issue is taken as a whole that its colors really shine.  The one downside to this is that because it does have strong Lynch influences, it’s definitely not going to be for everyone and it’s already pretty clear that this is not the type of book for people who want explanations for things right away.

GOOD LOOKING, ALBEIT A LITTLE MUDDY

For the most part Lost Falls #1 is a good looking book.  The selective usage of details and impression added to the dreamlike feel that the writing was trying to convey. This art is a bit of a double edged sword though, because that lack of detail leads to some of the characters lacking anything definitive about them to distinguish them from others.

BOTTOM LINE:  A SOLID COMIC FOR EVERYONE, BUT ESPECIALLY LYNCH FANS

Lost Falls #1 really knocked it out of the ballpark with the first issue.  A relatively subdued and measured issue, it manages to display its influences without becoming indulgent, lay the groundworks for a surreal mystery, and introduce a cast of characters without becoming overwhelming.  The art, while in line with the tone of the book, isn’t as clear as it could be and that leads to a little confusion.  Part of the Comixology Originals lineup, this is a solid pickup, especially for Comixology Unlimited members.  4.5 out of 5 stars

Lost Falls #1 is a well-made comic that has a couple excusable flaws. If this issue is any indication, this series will be a good one.