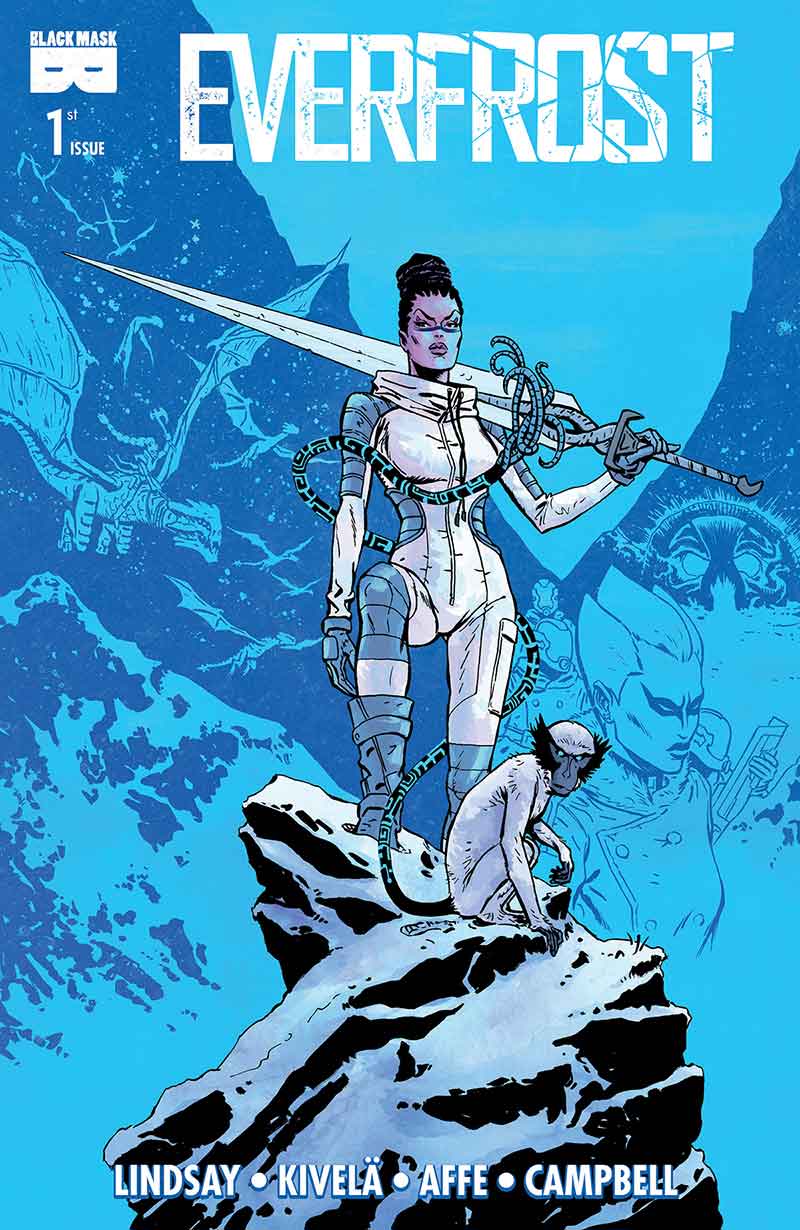 All scientist-warrior Van Louise wanted was to retire and get off-planet as her society collapsed, but she’s unearthed a mystery involving the death of her son… and she can’t leave without discovering the truth first–even as war brews in her violent and fantastical world. That’s the situation facing our hero in EVERFROST, the comic book series launching in June 2021 from Black Mask Studios, the Los Angeles based indie publisher of acclaimed titles including SPACE RIDERS, CALEXIT, 4 KIDS WALK INTO A BANK, and BLACK.

“This story came to me as a vision of a scientist walking through the snow, and she’s carrying a big sword, and even bigger loss in her heart. As I unpacked what makes Van, our leading character, tick, I discovered a world of heartbreak and inequality amidst the chaos of futuristic technology replacing ethics and strange creatures living among what’s become of humanity,” said writer Ryan K Lindsay.

On reuniting with his BEAUTIFUL CANVAS co-creator, Lindsay told us, “Sami is one of the best artists illustrating comics today. His ability to showcase emotion is second to none as he controls face acting, pacing beats, and the scope of huge moments like a grizzled veteran.”

“It’s always such a pleasure to work with Ryan, my friend and partner in crime,” said artist Sami Kivelä. “I’ve dug the idea of this story ever since he told me about it, and it’s been a long time coming – for various reasons – which is why it’s even more exciting to finally show the world what we’ve been up to!”

In EVERFROST, Van Louise retired to the ice coast so she could quietly find a way off planet from a world on the wrong side of societal collapse. She biohacks a dead leviathan to orchestrate passage away into the universe, but her plans are about to get chewed up by a mounting war between the Warlords – violent gatekeepers for the global ruling party – and the Bloom – those who risk extinction living out on the water – as well as a family reunion with her son who she hasn’t seen since he died in her arms when he was a child.

According to Lindsay, “I wanted to take a desolate landscape of the far future and soak it in the kinds of human issues Philip K. Dick used to weave through his paperback masterpieces. This is the biggest sci fi canvas I’ve played on yet, and I always appreciate the ability to go big and weird on the page to help illustrate human truths.”

“EVERFROST is my exploration of change, loss, and determination. It’s a story that’s helped me understand me and my world as I’ve explored Van and hers. Understanding why things happen is difficult to the point of being mentally fracturing, but understanding that you only have so much control can be freeing, especially if you let it give you focus,” said Lindsay.

EVERFROST will launch in June 2021.
You can preorder it through your LCS with the code APR211533