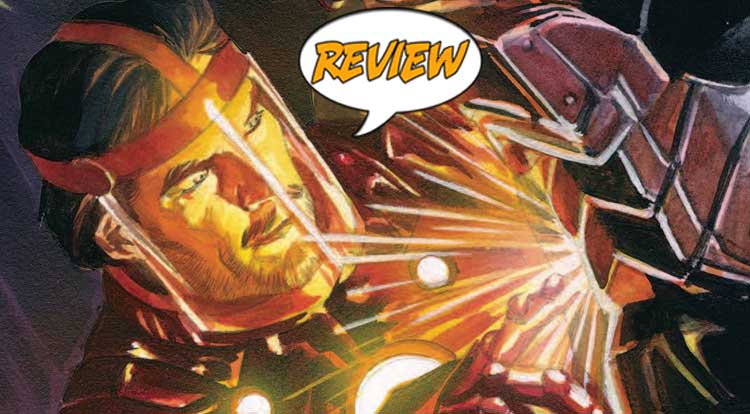 Previously in Iron Man:  Iron Man and his small band of allies go interstellar as they pursue Korvac to the farthest reaches of the galaxy, even as the villainous android intellect tries to telepathically lure Hellcat and Tony toward his bizarre utopian visions.  But after an unexpected left turn leaves Iron Man on a remote and uncharted planet, Korvac might take the opportunity to blow Shellhead’s vulnerable friends out of the stars once and for all.

In deep space, Korvac is making a run for Galactus’ world-ship, with Iron Man hot on his heels.  Fortunately, Tony’s FTL drive is considerably faster than Korvac’s kludged-together ship, to the point where he was even able to raise the troops.  With War Machine, Hellcat, Misty Knight, Halcyon, The Scarlet Spider (!), The Gargoyle (!!) and Frog-Man (!?) assembled, Iron Man takes a moment to hotwire not only his own armor, but Rhodey’s.  The makeshift team muses on the nature of God and the universe, while Hellcat remembers that she used to be a powerful telepath in her own right, opening a mind-channel to Korvac himself.  Korvac is suspicious at first, until Iron Man sincerely asks what the coming utopia will be like, causing Korvac to fill his mind with the images of what a perfect world would be like.

“If you worked for me,” Iron Man brazenly replies, “I’d fire your ass.”

LOST IN… AHH, FORGET IT

As the issue ends, Tony is separated from his friends, while Korvac is preparing to blow their ship to smithereens, which… would be bad.  Still, I have to admit, I’m enjoying Cantwell’s experimental take on Iron Man.  Tony Stark hasn’t had a really big change in his status quo since the early 2000s, and it’s wonderful to see the hero entirely working on his wits and his last bits of technology here.  He’s also got a broken neck inside his armor.  The real MVP of this issue, though, is The Gargoyle, who shares the wisdom only a 100-year-old man in the body of an immortal mystical creature can, ending a debate on the nature of God by explaining that God is simply a scared balance in the universe.  CAFU gives him some truly subtle facial expressions (and remember, he’s an orange-skinned monster wearing horn-rimmed glasses) and sells the moment perfectly, while Misty, Frog-Man and Spider-Man’s clone respond with awe, annoyance and quiet acceptance.

In short, Iron Man #7 is a great example of Cantwell and CAFU’s new Tony Stark paradigm, one that keeps the confidence, genius and heroism but takes a whole new tack (and a whole new forgotten supporting cast that’s equally brilliant), with a classic-style armor and some really well-done art making an excellent package, earning 4.5 out of 5 stars overall.  There’s a lot to love here, but I’m probably happiest that SOMEBODY finally remembered those old Defenders issues with Hellcat’s new powers.

Cantwell's Tony Stark knows his limits, but still feels like Iron Man, while CAFU can even make Frog-Man look cool. Well worth your time...