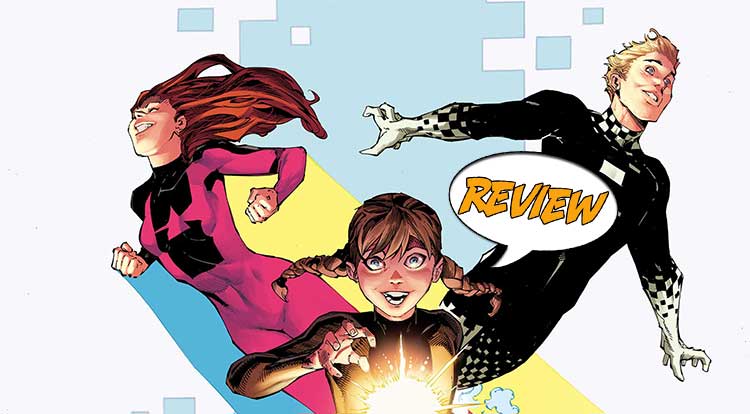 The Power children are all back together, just in time for their parents anniversary.  But will fighting a supervillain interrupt the festivities, and will going to jail interrupt that?  Your Major Spoilers review of Power Pack #1, awaits! Previously in Power Pack: Power Pack is back. Katie, Julie, Jack and Alex Power have been super-heroing since they were learning to tie their own shoes. It’s been ages since they fought side by side as a family, but a special occasion – and an old grudge – is about to put the gang back together

Power Pack #1 opens up with a (adorable) recap of the origins of The Power Pack and a reintroduction of the kids.  After explaining to the youngest member of the team that they can’t reveal their identities to their parents, the kids then join their parents for their anniversary dinner.  Halfway through the meal, a detailed radio broadcast alerts them that The Boogeyman is attacking an orphanage with the goal of eating the children.  The Power Pack then secretly excuses themselves to head out and fight the villain.   After a quick bit of strategizing the team springs into action.  After a few rounds of fighting, the brawl is interrupted by C.R.A.D.L.E. who is not very happy with the young heroes.

Power Pack #1 is a humorous and lighthearted book.  What’s nice though is that it’s not a saccharine type of humor even though it hints at this at the beginning.  But by the end the issue, Ryan North’s brand of irreverence and sarcasm comes through.  The scene with the radio newsflash and the reaction to it is a perfect example of this.  It’s this tone that carries this issue.  As for actual events and plot, it’s about as barebones as a superhero comic can get.  We have a little snippet of the characters’ day to day life, a threat appears, the heroes go off to fight that threat, rinse and repeat.  The good thing is that this tone works as both being a bit subversive to the comics medium but just being a little goofy and fun.   The big wrinkle here though is the arrival of C.R.A.D.L.E. and it’s connection to the Outlawed event that’s currently going on. Unfortunately, this issue on its own doesn’t add much to this event and so far there isn’t much to differentiate The Power Pack’s role from The Champions.

BOTTOM LINE: WORKS ON ITS OWN, NOT AS A TIE-IN

Power Pack #1 is a perfectly fine comic that has some laughs and a generally enjoyable tone that fits the characters and the plot.  Where it’s a bit lacking is its place in the bigger Outlawed event.  Of course, this is just issue 1 of a 4 part series, but a single page reference seems insufficient. 3.5 out of 5 stars.

Power Pack #1 continues Ryan North’s pattern of taking whatever characters he’s working with and using them to poke a little fun at not only the characters but the medium as a whole, just would’ve been nice to see more connection to the bigger event it ties into.