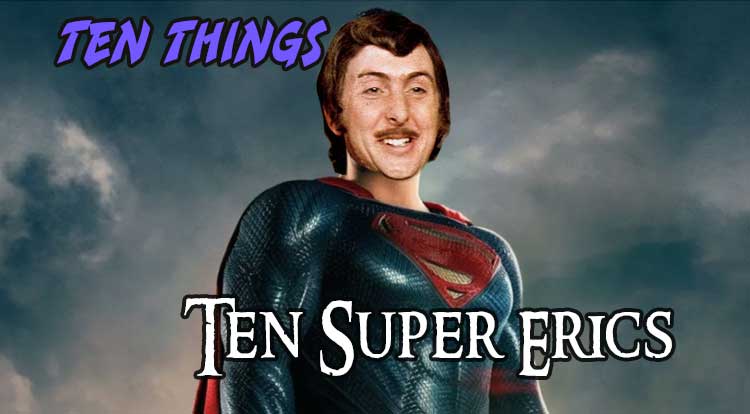 From Idle to Cartman to Bischoff, many funny folk share the name Eric… as do more than a few brave, heroic souls. Welcome to Ten Things: Ten Super Erics! A low-level SHIELD agent, Eric O’Grady is very much the quintessential schlemiel, as well as a layabout and a bit of a creep, when he discovers a prototype Ant-Man uniform… and steals it.  (Well, it is Ant-Man tradition.)  At first, he just creeps on unsuspecting women, but is dragged into a superhero career, even joining the Secret Avengers before giving his life to save innocent bystanders.  He was replaced by a Life-Model Decoy who is still active as The Black Ant, with Eric’s face and mind. Chosen by Nabu to replace Kent Nelson, Eric Strauss was far too young to make a good warrior against evil.  After being aged up by magic, he discovered that he could merge his form with his step-mother, Linda, to become a composite Doctor Fate with all the powers of a Lord of Order and Linda’s adult body.  With both minds active, they were somewhat scattered in their actions, and both Eric and Linda died in the service of Nabu, but were allowed to be reincarnated and marry in their new lives. Ex-CIA agent and soldier Eric Forrest gained the power of invulnerability thanks to an experimental formula received from a scientist he was assigned to protect.  Now surrounded by a (visible?) force field and calling himself The Enforcer, Eric is a member of the Crusaders, though he has altered his appearance to hide from his old CIA bosses.  In addition to his shields, he is a master of weapons and combat, carrying various firearms in battle. Another former solider, Lt. Colonel Eric Savin was betrayed by a colleague and killed, then rebuilt into a murderous cyborg.  Though initially under the control of the people who killed him, Coldblood-7 slowly recovered his sense of self, breaking free of his captors and becoming a mercenary.  In that role, he encountered Deathlok, whose story mirrors Eric’s in many ways, especially the whole “computer in your brain” bit.  When last seen, Coldblood-7 was part of Captain America’s anti-registration army during the first superhuman Civil War. Yet another ex-military superhero, Sgt. Eric Reid was badly wounded in the line of duty, with crushed vertebrae leaving him disabled.  Fortunately, the power suit allows him not only to walk, but to fly, as well as giving him enhanced strength, agility and durability.  Eric’s handlers used him as cover for their own illegal and unethical activities, causing him to abandon his military contacts and take the costume for himself, eventually going public with his knowledge. Max Eisenhardt aka Magnus aka Erik Lensherr is a mutant supremacist who has worked to replace humans as the dominant species for years.  The X-Men have both fought with and allied with him over the years, but somehow no amount of misbehavior has ever made Professor X completely write him off.  Magneto is currently one of the leaders of the mutant homeland on Krakoa, having essentially convinced Xavier and the X-Men to join his crusade and keep the puny humans at bay.

It’s… a little disturbing, to be honest. Yet another former soldier, this time a Marine, Eric Simon Payne fell in with a demon cult who wanted to harness his psychic powers for their own evil plans.  Eric went rogue, stealing their mystical Shadow Cloak and using its powers to stop their plans for a demon renaissance.  Sadly, Devil-Slayer’s mind has suffered during his tenure, and his last few appearances have been as a de facto villain. It’s really a shame, too, as those boots are AMAZING.

Devil-Slayer is a reworking of Demon-Hunter, a character that his creator Rich Buckler used at Atlas Comics, who is in turn inspired by Bloodwing, an even earlier Buckler creation. Vain, cowardly, selfish, snobby and loud-mouthed, Eric is one of six kids who were accidentally transported to a realm of Dungeons & Dragons and empowered by the mysterious Dungeon Master.  Even though he’s the quintessential rich kid jerk, Eric has moments of heroism, thanks mostly to the invulnerability benefits of his magical shield.  As a cartoon of the 1980s, ‘Dungeons & Dragons’ used Eric to push the theme that “the complainer is always wrong”, encouraging children to work with their peer groups in the most ham-fisted way possible.

He and his friends were NOT experiencing a dying delusion. One of the few Marvel heroes who can defy sliding timelines, thanks to his half-vampire nature, Eric Brooks was born in 1922. His mother was bitten by evil vampire Deacon Frost as Eric was being born, giving her son an array of vampiric powers without the whole curse aspect.  Since then, he has fought his night-stalking brethren, even joining the Avengers more than once, as well as helping to found the Midnight Sons and the team called Vanguard.  For a man nearly 100 years old, he keeps on top of slang and cultural trends surprisingly well. “This is 29 Acacia Road.  And this is Eric, the schoolboy who leads an exciting double life.  For when Eric eats a banana, an amazing transformation occurs: Eric is Bananaman!  Ever alert for the call to action!”  Originally appearing in the pages of a British comic called Nutty, Eric Wimp (renamed Eric Twinge for the cartoon) has only to eat a banana to gain the strength of “twenty big men!”  Bananaman may be kind of an idiot, but he has a good heart and his boots and gloves are epic-tier accessories in my book.  As a child, I encountered his adventures on Nickelodeon, and there’s a chance his nonsensical approach to super-heroism helped to shape my superhero world view.

This week’s topic, Ten Super Erics, is all me, but feel free to follow along @MightyKingCobra for more Ten Things madness on Twitter.  Or you can check out the full Twitter archive here!  As with any set of like items, these aren’t meant to be hard and fast or absolutely complete, if only because there are only so many names in the world, and some keep coming back.  Either way, the comments section is below for just such an emergency, but, as always: Please, no wagering!