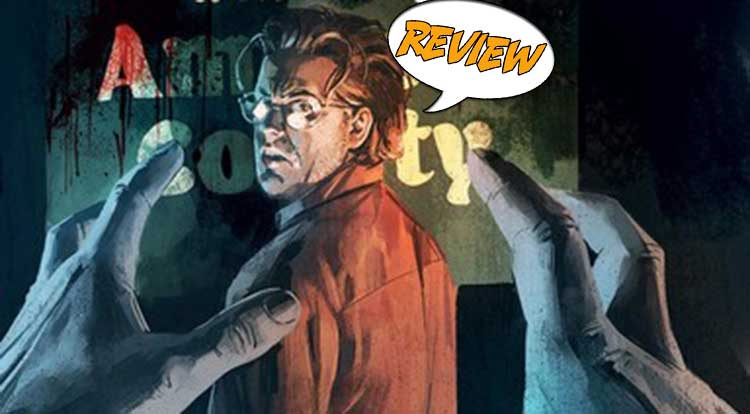 When Randall wakes up and sees his bloodied brother Travis staring at him, in THAT TEXAS BLOOD #2, it kicks off a return home to Ambrose County, a place Randall fled.  A place full of memories and ghosts, a place full of people that hate Randy.  Is Randy a changed man, and will he get out alive?  Find out in your next mighty Major Spoilers review! Previously in THAT TEXAS BLOOD:  Sheriff Joe Bob is marking time, keeping the peace in Ambrose County.  He’s getting on, but devoted to the job.  He’s off his game, a little, so when he doesn’t bring Travis Terrill in for beating on his girlfriend, it’s sure to backfire.  And it does, mainly for Travis, who is found dead by the side of the road in the middle of nowhere.  Randy was a bad, bad man, with no lack of enemies.  And it’s up to Sheriff Joe Bob to find out who it was who killed him.

THAT TEXAS BLOOD #2 is a fine follow up to the opening issue.  Chris Condon and Jacob Phillips open the story up, with the introduction of Randy Terrill, who long ago left Ambrose County and cleaned up his act.  But leaving isn’t the same as escaping, and Randy’s no good ways back in the day linger like the smell of rancid meat, in Ambrose County, at least.  But Randy has no intention of going back, not until he awakens to a vision of his dead brother, Terry, and then a phone call from back home that confirms Terry’s death.

It’s a bold move for the writers to start what is ostensibly a comic devoted to crime, with effectively a supernatural vision.  But not one that is without precedent.  Writers like Laird Barron mix crime with horror to devastating effect, and a writer as powerful as Cormac McCarthy has done it with beautiful, harrowing prose for nearly three decades.  Those who skirt the law often inhabit a liminal space where the real and the unreal often mix.

Randy’s past isn’t one he’s content with.  With his brother, it is clear that Randy raised hell in Ambrose County.  He’s cleaned up his act, given up the drink, and moved on.  But you can never really leave home and with Terry’s death, Randy has to go back and deal with that, but a whole host of memories of those who were damaged by their wicked, wicked ways.

Much of THAT TEXAS BLOOD #2 is a slow burn.  Randy’s journey back is full of reminders of what he did wrong, such as the confrontation in the diner, or the warning from the hotel owner that he doesn’t want any trouble while Randy is in town.  The story builds and builds, as the writers hint at the things Randy and Terry got up to in their youth, without confronting it head on.  At some point, they will have to provide a pay off to also this build up, but right now, it feels deeply satisfying to feel your way into the mystery of not only what they did, but who killed Terry and why.

I first came across Jacob Phillips artwork in CRIMINAL, which I’ve reviewed extensively for Major Spoilers.  I’m happy to report that Phillips’ work is as stellar as ever.  His detailed artwork conveys the world weariness of a character like Sheriff Joe Bob, or the wariness of Randy, as he feels his way through the minefield that is Ambrose County.  He’s the master of conveying mood and atmosphere with a single panel, such as when Randy runs his hand through his hair.  It shows a mixture of frustration and denial, that words themselves would lack the power to convey to the reader.  Elsewhere, it is the final panel, shot from ceiling height, between the slowly rotating fins of a fan, that brings home to the reader that we have left the land of normalcy behind, and entered the world of criminal noir.  I could eat up Phillips’ artwork all day, every day, and it is an absolute pleasure to crack open THAT TEXAS BLOOD #2 and just sink into the world he has realised with pen and paint.

THAT TEXAS BLOOD #2 opens with a mystery, and only plunges deeper into the questions arising out of Travis Terrill’s murder.  The characters are well drawn, especially Randy, who had hoped he’d escaped his wild ways, only to be once again drawn in by his brother’s death.  The mystery aspect of the story is interesting enough, but it is the depiction of the characters that brings real weight to the world both writers have created.

THAT TEXAS BLOOD #2 brings with it a sense of place that many books hope to create, but few do. Not only the barren plains around the town, or the hard scrabble lives man of its inhabitants lead. There’s also the weight that history plays in the lives of the main characters, people with flaws and weaknesses that the stress of events threaten to crack wide open. THAT TEXAS BLOOD #2 is an excellent example of how comics genre isn’t exclusively men and women in tights, but can be about men and women leading normal lives, until the resolutely abnormal thrusts itself inside those lives, and disrupts everything.
Chris Condon Image Comics Jacob Phillips Review That Texas Blood
Share. Twitter Facebook Pinterest LinkedIn Tumblr Email
Previous ArticleWayne’s Comics Podcast #445: Interview with Todd Kelley
Next Article Retro Review: Doom Patrol #99 (November 1965)