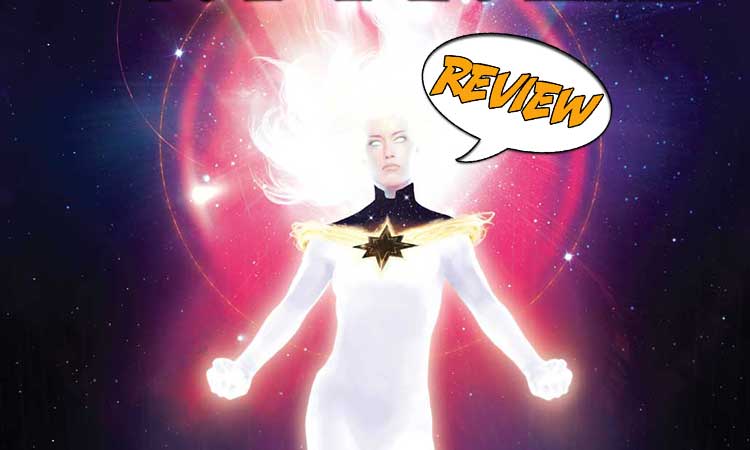 The Earth is in need of saving and the threat can only be dealt with by one person: Carol Danvers aka Captain Marvel. Your Major Spoilers review of Captain Marvel: The End #1 from Marvel Comics, awaits! Previously in Captain Marvel: The End: Fifty years ago, Carol Danvers went into the deepest reaches of the cosmos to spread peace and justice and she hasn’t seen a familiar face since

Only One Person For The Job

We open up in the year 2051 in a distant galaxy.  A giant insect monster is terrorizing a planet and Captain Marvel is on the scene.  After unsuccessfully attempting to talk the beast down, she kills it.  She returns to her ship where she’s surprised to see a distress signal from Earth saying only one thing “Avengers Assemble”.  A flashback reveals that many years before something terrible happened to Earth while Carol was too far away and left the planet decimated.  Back in the current time, Carol arrives back on earth and is greeted by a surprise.  A group of heroes including: Emma Frost, Hazmat, Molly Hayes, Armor, and Jessica Jones.  With the surviving heroes are a handful of children of heroes like, Dani Cage, Gerry Drew, Gambit and Rogues daughter, Danny Rand and Misty Knight’s kid, and Rhodie’s daughter.  They inform her that they’ve managed to survive using a combination of their powers, but a nearly invincible monster is on it’s way and they can’t stop it.  Carol takes no time to get a team together to fight it.  Utilizing her team’s abilities she manages to go inside the monster and kill it.  During the celebration she realizes that the monster wasn’t the real reason she was called back to Earth.  The survivors reveal to her that the real threat to the planet is that the sun is dying.  Carol doesn’t hesitate and flies off.  She throws herself into the star and perishes reigniting it.

I’ve read a few of these “The End” books and so far they’ve all been fairly middling, Captain Marvel included. But, there’s one way that Captain Marvel stands out from the others: By the end, this issue effectively uses the story of Carol Danver’s death, to define who the character is, now. The problem with this is that it makes the comic feel reversed engineered. Every aspect of what happens feels conveniently placed to not only make sure Carol dies, but that there’s an emotional response.  Now, that doesn’t mean that some of the little reveals, like that Danny and Misty had a child is fun and nice little moment, when they’re placed into this story they come across as cinderblocks to build up to Carol’s death rather than independent developments of their own. Yet, as mentioned earlier, there’s a clearly communicated and encompassing idea of who Captain Marvel is and in that regards Captain Marvel: The End #1, is successful.

One of the best things about this issue is the decision that Captain Marvel is now permanently in her binary form.  It’s a clever way to convey a character development without explicitly stating it and I appreciated it.  Plus, it helps that it just looks really cool, I really enjoyed the purplish white colors that make it look like you’re constantly looking at a welding torch.

At the end of the day Captain Marvel: The End #1 does manage to tell a story in which Carol Danvers dies.  It also manages to do so in a way that retroactively defines the character. Her priorities, goals, and personality traits, all come across in the way she handles her final outing. The trouble comes from how this ending is reached and the unnatural way the issue tries to elicit an emotional stake.  3 out 5 stars.

Captain Marvel: The End #1 is a strong ending for the character. Unfortunately it’s propped up on lazy, and emotionally manipulative story beats and cameos.