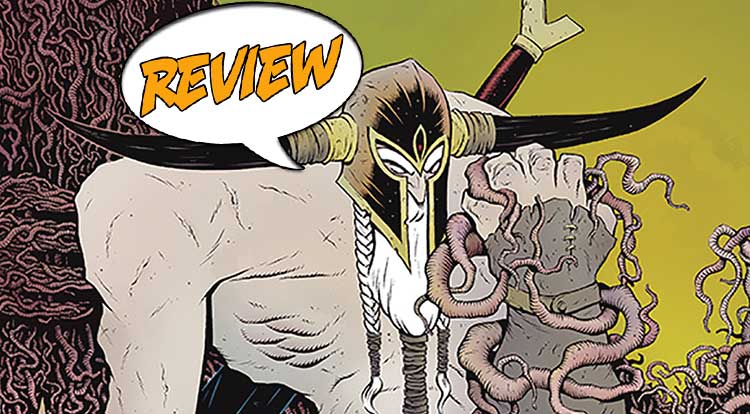 Head Lopper #12 is a fantastic read, populated with entertaining characters and non-stop action. Would that there were more of these titles on the market; but in the meantime, savor and enjoy this great issue.

The Toad God is dead!  But the goblins are still rampaging at the gates, there is a breach in the wall, an assassin stalks the king, a giant blob has begun to devour the city, and a Reptilican Wizard seeks to capture Agatha’s head.  Will Norgal the Head Lopper prevail?  Find out in our Major Spoilers review! Previously in Head Lopper: the siege of the city of Venorah by the goblin hordes and their loathsome Toad God has seemingly been stymied but at a terrible cost, as the King’s First Sword dies on the cusp of victory.  But the true evil lies within, as the Archcleric, Florentine, hatches her coup, a terrible creatures begins to consume the city, Arlen and Brishka face death.  And looming in the background stands Norgal, the Head Lopper, ready to defeat one and all…

Head Lopper #12 embodies many of the aspects of Robert E Howard’s supreme creation, Conan.  The vibrancy of his writing, the scope of his world building, the sheer vitality of Conan, is all visible here in Andrew MacLean’s masterful creation.  This issue, thanks to its extended page count, juggles a number of disparate plotlines, settles the fate of several characters, and opens up the series to its next chapter.

The Siege of Venorah continues apace.  With the Toad God dead, the goblins are momentarily in disarray.  But the foes on the other side of the wall faced by our heroes (pleasingly, several of them are women, and two of them are lovers) pale into comparison by the human evil (Florentine, a religious extremist) and the supernatural (a blob creature that is exponentially growing in size as it starts to devour the city and its people).

Head Lopper #12 is distinguished by its pacy storytelling and vibrant art.  MacLean does well to juggle the characters, expertly switching scenes to help build up the tension and also the speed of the issue as it barrels towards its conclusion.  He laces all the fighting with acute character moments – Arlen and Brishka’s reunion comes immediately to mind and also, in the grand tradition of sword and sorcery, with elements of dark supernatural magics and creatures.

LORD OF THE THINGS

I really enjoyed how MacLean moved from the low fantasy of the setup, to a more epic, high fantasy ending, with the introduction of a deity late in proceedings.  It really does speak to his confident storytelling that all these different elements cohered.  There’s a real risk that all these aspects could collapse under the weight of ambition into a mess, but thankfully it doesn’t happen in Head Lopper #12.  We’re presented with a confident story that sticks the landing, delivers the comeuppance certain characters deserve, while introducing at the end a new elements and characters that will propel the character well into the future.

Not only does MacLean write Head Lopper, but he is also the artist for it.  At first, I wasn’t sure that the more cartoony aspect of the artwork was for me.  I thought (and still tend to) that a more naturalistic approach would heighten the impact of the story for a reader.  But there’s something really appealing about the (seemingly, but definitely not) simpler design of the characters and setting.  The monochrome panels where the deity appears, set against a blank background, is simply awe-inspiring, as any visit by a God undoubtedly would be.  More prosaically, the action scenes are full of vigor and well, action.  Comics will never be able to compete with action scenes from movies – what they need to do is show the reader the beginning, a key scene in the middle, and then the bloody denouement, which Head Lopper #12 does in spades.  The highlight for me, and one that provoked the most appreciate laughter, was when Head Lopper tore off his upper armor in a berserk frenzy and charged into battle against his foe with the roar of ‘Bring it!’  The panel layout on this page heightens the impact of his actions and thus draws the reader in.

BOTTOM LINE:   BY THIS SWORD I SHALL RULE!

And by his pen, so does MacLean rule.  Head Lopper #12 is by far the best fantasy title on the market now.  It is full of choice character moments, with headlong battles and fight scenes that show the medium at its best.  The quarterly schedule and extra pages work to the book’s advantage and any collection of these issues is a must buy for anyone looking for fast paced action, supernatural monsters and a main character created to cause maximum mayhem.