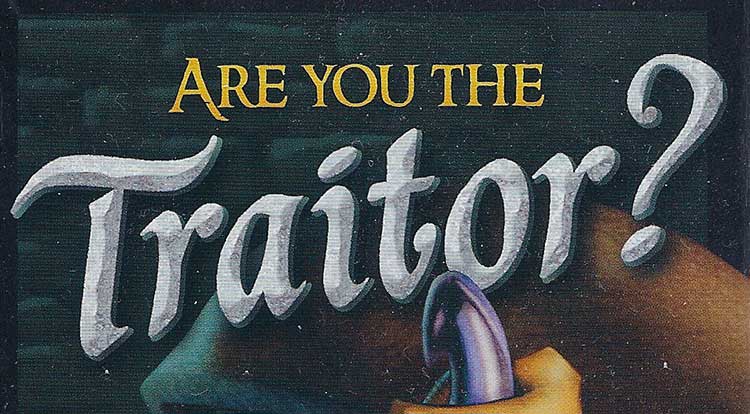 [Gaming] Are you a traitor?

In a competitive game you usually know who are your opponents. In a cooperative game you are opposed only by the game itself. But in a semi-cooperative game there is often a hidden agenda for one or more players. This player or players takes on a traitor role where they appear to help the group or team while working toward a unique hidden goal. Games with a traitor mechanic are a good mix of social deduction and teamwork.

The first time you play a game with a traitor can be equal part of excitement and frustration. In a cooperative game you can get help from other players but as a lone traitor you can’t always ask for help in or out of game with out giving yourself away. Shadows over Camelot is an excellent introduction to how to play a traitor. In this game players take the role of Knights of the Round Table and work together to stop the forces of evil. One of the players may secretly be a traitor and will have chances to undermine all the work being done by the loyal knights. If you are outed as a traitor you are not eliminated but flip your player card and have a new set of actions available. Shadows over Camelot does not always have to have a traitor so it can opted in or out for learning purposes.

Dead of Winter is a great semi-cooperative game where every player has a group goal and a secret goal. Each player takes control of some characters in a post apocalyptic themed zombie winter game. Survival is the overall goal achieved through different missions. Each player will also have an individual secret goal they need to complete in order to fully win the game. This means that a traitor will not be so conspicuous as every player may seem like a sneaky betrayer if they appear to hold back useful items or get caught out by card actions. The traitor does not have a special set of actions but works to sabotage the main mission and achieve their own personal goal.

One of the most thematic board games to have a traitor is of course Battlestar Galactica. Players take on the roles of characters from the TV show and follow the steps of the acclaimed series. Players work together to get the Galactica safely to Kobol. But like in the series, the Cylons secretly harass the crew all along the way. At different times in the game Cylons may be revealed and dealt with but it is up to the savvy crew to deduce who is a “Skin Job” before it is too late. This game is super thematic and and accurately portrays all the intrigue and deception present in the series. If you are a BSG fan you will absolutely love this game.

If you are looking for a fairly quick game in the spirit of BSG, Dark Moon (formerly known as BSG Express) is a slimmer version that does not hold back on the plotting and scheming that occurs in the bigger version. Dark Moon plays in just over an hour making it a game more likely to fit into a game night session. The theme vaguely represents the Alien movies and while being fairly generic in space very much fits with the suspense and mechanics of the game. The biggest difference in game mechanics is the different use of dice in each turn phase. Dice can be used for actions, voting tokens, or task results. Very good components in this game. It shows up fairly often in my game group due to the shorter play time.

There are several more games that feature a traitor mechanic and something may have a theme that fits your style a little better. Certain games have open traitors while some keep the role hidden the whole game. Try a few out at a game day or local event and see if you are a capable traitor.