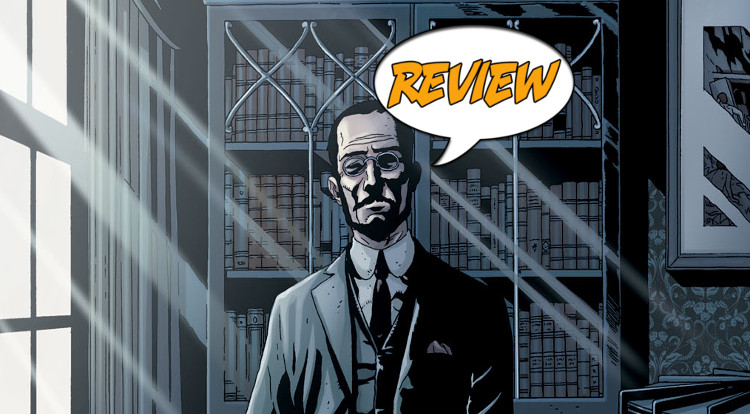 I’ll start with this right off the bat: H.P. Lovecraft fans and those familiar with his work are going to get more out of Providence #1 than the average reader.  Having the slightest knowledge may even not be enough as Moore is delving so deeply into Lovecraft’s works that the pages are overflowing with references.  This issue heavily borrows its plot from the short story “The Cold Room”, where a man visits a doctor whose apartment is kept at freezing temperatures.  Robert, works at the Herald newspaper and needs to find a story to write in order to fill a half page spot.  Remembering the legend of how the book “Sous Le Monde” allegedly drove readers insane, he figures it’d be an alluring story.  “Sous Le Monde” inspired “The Yellow King”, a book with similar results, and Robert goes to interview a doctor who wrote an essay on “Sous Le Monde”.  As with the Lovecraft story, the doctor is keeping his apartment cooled with a special ammonia cooling machine.  He uses this because it is required for an illness he has.  Information is shared, mysteries are spoken about and by issue’s end, a secret about Robert is revealed.  I personally found the reveal a bit predictable, but the fashion in which it’s handled is extremely well done.  Moore uses many techniques we’ve seen from him before, most notably journal entries and point of view shots.  Many were seen in Watchmen but here it appears a bit more refined.

My enjoyment of Moore’s work varies greatly and I find myself loving his writing, to downright loathing it.  His more recent work hasn’t sat well and I find him using other people’s characters and stories too much.  There’s also a pretentiousness and the reader is expected to know everything Moore knows about the work he is basing his stories on.  Much of that is the case with Providence, yet I found myself enjoying it quite a bit.  While H.P. Lovecraft stories are used and referenced, the characters are original and Moore is doing a better job telling a unique story.  Even if intimately knowing Lovecraft’s writing, as well as background in literature (specifically The Yellow King) elevates your enjoyment immensely, the average reader is able to pick Providence #1 up and get a great story and opening issue.  It’s still not as accessible as early Alan Moore and the impression “if you’re not as smart as Moore, then too bad, you can’t read his comics” is present and still irritates me.  That’s not to say comics need to be dumbed down for their audience, but I think Moore could make his work more welcoming and less driven by ego.  Regardless, this issue is amazing and as a huge H.P. Lovecraft fan it grabbed me with its numerous influences and references and even made me revisit some Lovecraft stories.

From what I’ve seen of some of Moore’s scripts, I empathize with artists on his comics.  The level of detail and information expected to be portrayed is immensely mind-blowing and Jacen Burrows handles the challenge spectacularly.  No amount of space is wasted within the pages and there are great subtle details present that not only add to the work, but clue the observant reader into what may be taking place.  The scene in the doctor’s apartment is a perfect example.  Robert’s breath can be seen but not once do you see the doctor’s, allowing the reader to figure out the reasoning for the chill.  All clothing and settings match the time period perfectly and it’s clear Burrows has done his research, something that helps the authenticity immensely.  While the coloring is drab, it is so intentionally and matches the stories tone and setting.  Looking at the doctor’s skin tone really portrays just how sick the man is.  The art team really knocked it out of the park here.

Providence #1 is what you’d might expect from Alan Moore, both good and bad.  Fortunately, it is as accessible for average readers as much as those with extensive knowledge of its subject matter/influences.  It’s dense material but not as much a challenge, or frustration, as I expected.  The artwork is phenomenal, crafting a just as creepy an atmosphere as the story.  Providence #1 floored me and it’s some of the best work I’ve read from Moore in a long time.  I highly recommend everyone pick this one up.

Providence #1 is some of Moore's best work in a long time and the artwork is wonderful as well.