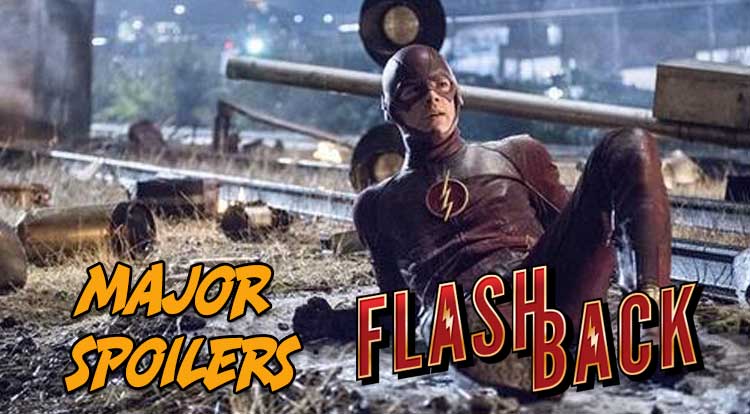 The Weather Wizard is here (again)! With Joe West caught in the crosshairs, it’s time to take a look at the episode in an all new installment of Flashback!

NOTE: Expect a lot of F-bombs, Holy S***s, and more after the jump!

Mark Mardon, having survived his apparent death during the black-matter explosion, returns seeking revenge on Joe for the death of his brother Clyde and has the same weather-manipulation powers as his deceased sibling. While many will point to the first appearance of The Weather Wizard in the first episode of this series, that was actually the Weather Wizard’s brother. While Clyde was an easy introduction of metahumans in the Arrowverse, I think the creators quickly realized recurring villains are much easier to write and cast than a villain of the week that gets killed off. Regardless, Mark Mardon is not the first person in comics or television to control the weather. Mark’s brother, Clyde was a scientist who discovered a way to control the weather before dying of a heart attack.  Mark took his brother’s notes and technology (The Weather Wand that also appeared this week) and turned into The Weather Wizard in The Flash #110 (December 1959).

The Weather Wizard went away after the events of Crisis on Infinite Earths, but resurfaced bigger and badder during the Underworld Unleashed event (mainly because his green costume looked freaky with the new green ink DC Comics was using at the time).

In comics, The Weather Wizard’s doesn’t need technology to manipulate the weather.

In The New 52 reality, Marddon returns to using his wand, but reveals that the device drove him crazy.

Weather Wizard was created by John Broome and Carmine Infantino.

While I enjoyed the heck out of the first meta reference Cisco made a couple of episodes ago, this week’s naming of Weather Wizard seems a bit too breaking the fourth wall to simply be a wink and a nod to the audience. Is Cisco secretly telling us something he knows about the world he lived in?  Will Flash make the jump and find himself in Julius Schwartz’s office in the future?

All of this brings us to…

He knew how to dance)

WHO IS RESPONSIBLE FOR ALL OF THIS!? Final speculation has been wiped as Dr. Harrison Wells revealed that he was indeed Eobard Thawne, a distant relative of detective Eddie Thawne, who has been trapped in the past these last 15 years.

Eobard Thawne was born in the 25th Century, a time when you could genetically engineer your child. Eobard’s parents tweaked his code to make him super intelligent, but in the process made him very anti-social. On the plus side (if you want to look at it that way), Eobard was intensely interested in everything related to the Speed Force, and in a weird time travel twist that is about as wacky as Bill and Ted reminding themselves to remember a trash can, a future version of Thawne travelled through time to kill those that blocked his way, including his younger brother and Professor Drake, who worked at the Flash Museum studying the Speed Force. His altering of the timeline allowed Thawne to take over Drake’s position at the Flash Museum, and because of his knowledge of the Speed Force, he was given the nickname Professor Zoom.

There’s a whole string of really crazy and creepy tweaks to his own timeline, which also explains why Nora was killed in the television series.  Thawne longed for the good ole days of superheroes, and wanted to live and meet Barry Allen. Unfortunately, the Cosmic Treadmill wasn’t calibrated correctly, and Thawne ended up arriving after Barry Allen’s death. This drove him a “little” crazy causing him to believe he was Barry Allen, and kicking off a strange relationship with Wally until the cracks began to show in the Return of Barry Allen storyline.

In a really complex and convoluted story involving Wally, Barry, Fiona Webb, and TWO Zoom’s (Eobard and Hunter Zolomon), Barry, running at super speed, clotheslined Zoom snapping his neck and killing him.  Interestingly, there are a couple of times others have posed as Professor Zoom to screw with the Scarlet Speedster.  One was the already mentioned Hunter Zolomon, and the other was none other than… Abra Kadabra.

During the events of Blackest Night, Thawne was resurrected and became The Black Flash.

Eobard Thawne first appeared in The Flash (vol 1) #139 in September 1963.  The character was created by John Broome and Carmine Infantino.

This episode really proved how horrible (and thus how great) a villain Harrison Wells really is.

In case you didn’t notice, Captain David Singh’s fiancé finally made an appearance this week. Since the series began,  Singh and Andrew have gone from couple to engaged in this episode.  The hospital scene showed that the administration allows same sex couples to be considered family. The fact that Captain Singh is openly gay, and if the two are indeed getting married, that means the Arrowverse is a lot more progressive. In Kansas (where Keystone City is located), same sex marriage is illegal, while in Missouri (the fictional home of Central City) the ban on same sex marriage has been ruled unconstitutional, though, “On November 7, U.S. District Court Judge Ortrie D. Smith ruled in favor of the freedom to marry in a federal case from Missouri, striking down the state’s marriage ban and paving the way for the freedom to marry to begin in the Show Me State. The ruling is stayed until the judgment is final.”

As we mentioned in other installments of Flashback, the comic book version of Captain Singh is secretly homosexual and in a relationship with Pied Piper.   Andrew hasn’t been given a last name in the television series, but I’m going to bet it isn’t Rathaway.

From the “Because Stephen Can’t Let It Go Department” this week, we take a look at Mark Mardon’s apartment. If you didn’t notice, he lives in a rundown place, in apartment #123. Flash #123? Does that ring a bell for anyone?

Either the creators are really starting to screw around with this, or this means something!

Time travel is always a tricky situation, you never know where you’ll end up, or if stepping off the path will alter the course of history. Or in this case, traveling back on your own timeline and giving you the ability to undo everything in this episode.

The cliffhanger to this week’s episode is definitely a Holy S**! moment.  On the plus side, because Barry has traveled back in his recent timeline, there’s a good chance he’s going to undo the Iris West knowledge, and hopefully bring Cisco back from the dead. On the negative side… we’ll we’ve seen the Flashpoint Universe and what kind of crazy stuff happens there.

Next week’s episode is called Rogue Time, and I don’t think it will only focus on Captain Cold and Heat Wave.

Want to hear Matthew Peterson and I sit down to discuss this episode in detail? If you are a Major Spoilers VIP, look for the Flashback Podcast hitting the VIP site soon!