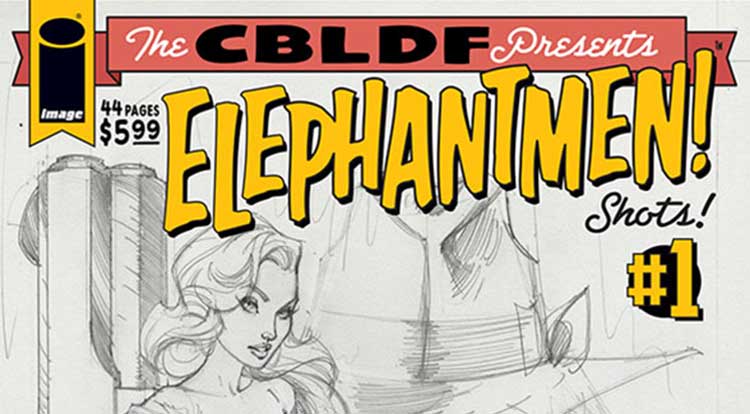 All proceeds earned from ELEPHANTMEN: SHOTS #1 will go toward supporting the CBLDF’s important work defending the rights on which our community depends.

“I’m sure I wasn’t the only comic book creator affected by the Charlie Hebdo massacre earlier this year. It was a deeply shocking and terrifying event that sent ripples throughout the cartooning world. It really made me realize the importance of supporting organizations like the CBLDF, who stand vigilant for cartoonists whether there’s a traumatic event capturing our attention or not,” said Starkings. “I counted up the strips that we’d produced for The Hero Initiative, Thought Bubble and, of course CBLDF’s own Liberty Annual and decided that, rather than do nothing but worry, I could put out a special issue of Elephantmen to benefit the CBLDF. Eric Stephenson at Image Comics agreed and… voila!” ELEPHANTMEN: SHOTS #1 arrives in stores on May 27 and can be pre-ordered with Diamond Code MAR150521.

ABOUT COMIC BOOK LEGAL DEFENSE FUND (CBLDF):
Comic Book Legal Defense Fund is a non-profit organization protecting the freedom to read comics! Our work protects readers, creators, librarians, retailers, publishers, and educators who face the threat of censorship. We monitor legislation and challenge laws that would limit the First Amendment. We create resources that promote understanding of comics and the rights our community is guaranteed. Every day we publish news and information about censorship events as they happen. We are partners in the Kids’ Right to Read Project and Banned Books Week. Our expert legal team is available to respond to First Amendment emergencies at a moment’s notice. CBLDF is a lean organization that works hard to protect the rights on which our community depends. For more information, visit www.cbldf.org.