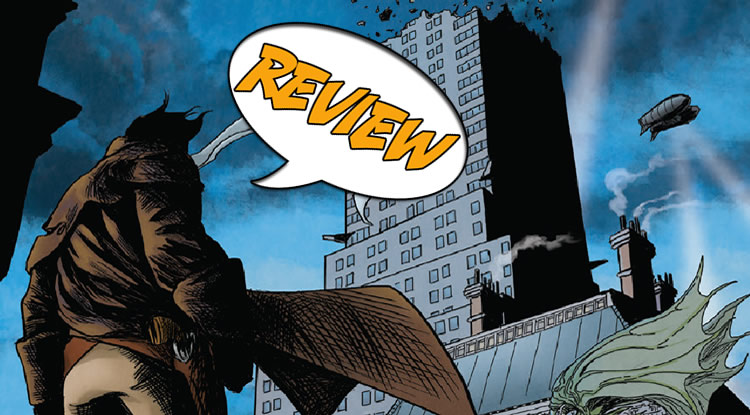 What if Harry Dresden lived in a steampunk universe a hundred years after World War II? Why, you’d get Gutter Magic, an entertaining comic that wonders what would have happened if magic had altered the war’s course.

Previously in GUTTER MAGIC: Cinder Byrnes should be the heir to a powerful magical dynasty, except he can’t cast a spell to save his life. After years of searching, scheming, and outright stealing every bit of research he can find on the subject, he’s finally found a spell that can fix his connection to magic. The people he stole it from are out for his head, naturally … but even if he stays ahead of them, he still needs to figure out how to cast it in the first place. In a world where WWII was fought with magic, all bets are off as Cinder navigates the strange society of magical creatures, powerful wizards, and ordinary people that inhabit his world.

RIGHT OFF THE BAT, THIS COMIC GRABBED MY ATTENTION

I’ve been a fan of The Dresden Files by Jim Butcher for years. One of the big reasons for that is that magic is much more manageable than it has been in other tales about witches and warlocks. So often, the solution to whatever problem is being dealt with appears literally out of nowhere, and I just hate that. The very least one can do is to at least set up earlier in the story what will be needed much later on. That makes for much more enjoyable reading to me.

Butcher has done that for as long as I’ve been a Dresden fan. And I see a lot of that kind of thing happening in Gutter Magic. Now, that doesn’t mean there aren’t any surprises because there are, and they’re really good ones.

What I enjoy so much about Cinder Byrnes, the main character, is that he’s not some hyper-powerful magician who can do everything. In fact, Cinder’s struggling to improve into someone who can actually cast a spell! He’s someone we pull for because he has to work hard to get things done, much like we the readers often do in real life. When he’s surprised, we’re surprised. I enjoy that a lot!

All this takes place in Meridian, a place previously known as New York City. Don’t be surprised to see portions of buildings floating in the air and other magical happenings. You should also expect to see six-guns and other lower-tech items in use since magic seems to have replaced technology.

WHAT ABOUT THE SCRIPT?

The pacing of the comic is quick, with little nods to other magic stories, including a moving staircase that reminded me of Harry Potter. “Easter eggs” like that help me enjoy a comic all the more, frankly!

And why is the book titled as it is? “Gutter Magic” is actually the magic of the streets, not the high art of practiced sorcery practiced by the better magicians above.

Besides Gutter Magic, Rich has also contributed stories to Comixtribe’s Oxymoron 2012 Anthology, and Red Stylo’s Shakespeare Shaken Anthology. In addition to his work in comics, he has had prose stories published in the Dirt Press Anthology, Burning Empires RPG (based on Chris Moeller’s Iron Empires graphic novels), and the Burning Wheel RPG by Luke Crane, author of the Mouse Guard RPG. I need to check these things out very soon!

THE ART IS STRONG AND CLEAR

Often I’ve found books about magic to be dark and uneasy to understand, which I think is meant to resemble how magic supposedly works. This comic is much more clearly read in both coloring and drawing, which I found much more agreeable as I read it.

I hope that Mr. Barkley will provide the art for the rest of the five-issue miniseries, and hopefully in future books in this universe as well.

BOTTOM LINE: GUTTER MAGIC IS A FAST-PACED, WELL-MADE COMIC THAT WILL APPEAL TO FANTASY FANS AS WELL AS REGULAR COMICS READERS

Gutter Magic is an enjoyable read full of clearly defined characters in a world that is both intriguing and fun. You can’t take anything for granted in a magical environment, and that kept me moving from page to page quickly.

This book deserves your attention. The first issue is only 99 cents, so it’s more than worth your time and money to enter this interesting universe. You can find the first issue digitally now on Comixiology.

I’m hoping issue #2 will be released before too long. I saw some black-and-white preview pages online, and they just added to me wanting more in this universe!