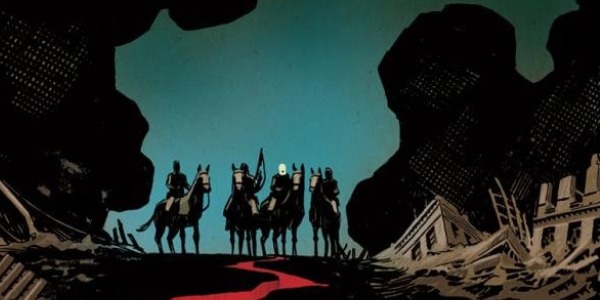 The small group of B.P.R.D operatives, led by Johann Kraus, continues to push forward into Chicago with one small hitch in their plan: a young survivor they accrued along the way, Lucas, has gone missing. Will they find him or will he be forever lost to the wastes? Should we care? Major Spoilers finds out.

Previously in B.P.R.D. Hell on Earth: Wasteland: As Johann Kraus continues to lead his team further and further into the wastes of Chicago, the team manages to find some horses in order to continue pushing forward. Although, after the brief relief of having to no longer walk all the way to Chicago, it appears that Lucas, a now orphaned boy they picked up along the way, has run away.

THERE’S A REASON KIDS ARE ANNOYING IN FICTION

After (rightly) giving up on finding Lucas, Johann Kraus and company continue trekking towards Chicago to find their fallen comrades. It’s not without its risks though. After having a run in with some of the mutated monsters, the team finds their contact point via some local vagrants. Of course, going inside, they find more than they intended, including a face from several issues past. Lucas, whose job as the kid is to nearly ruin everything, ends up bringing a number of monsters with him back to the B.P.R.D. team.

It’s really hard to make a child character in fiction—let alone comics—that doesn’t come off as annoying or saccharine sweet or both. In this case, Lucas is just annoying with a bit of stupid on the side. It’s really hard to believe a child would be as naive as to think that his mother, who’s obviously become a monster, would still think she had any semblance of whom she was inside. It’s fairly certain that the writers—or at least Mignola—have children. Why did they decide to make this kid a little ignoramus? It’s one thing to have him run off, but a totally different thing for him to bring back a horde of mutated freaks and think this was fine. It felt more like a means to an end than anything else.

It really helps to have read B.P.R.D. Hell on Earth: The Abyss of Time in order to fully understand the end of this story arc. Oddly enough, the fate of Howards from the Abyss of Time has personally been on the mind so to see him reemerge was oddly satisfying. Too often in B.P.R.D. they don’t return to find out more about a character. Or that character gets lost in a sea of similar faces. This time around though, one who knows the previous story might actually be interested in the outcome. It’s also a nice little twist.

However, the twist isn’t enough to save the ending. While a lot of the books in this series end on a rather bitter sweet note, this one just sort of ends. It could be considered bitter sweet if one cared enough about the fate of Lucas but, honestly, the kid is so annoying it’s really hard to worry about him.

Campbell and Stewart have done a good job keeping up with the general feel and atmosphere the B.P.R.D. series seems to have. It’s desolate, mute, and shadowy. It’s a world in disrepair and it’s a world in despair. Both really come off well in this book.

There’s even a slight Walking Dead feel to some of the depictions of various dead bodies they come across, which actually looks pretty good without being unnecessarily detailed. It’s the same with the monsters as well. The artists could easily have gone the graphic and gross route, having a lot of unnecessary gore, but wisely only give the necessary detail when it serves a purpose—not just gross to be gross. They also employ a lot of heavy shadowing in order to keep things to the imagination if need be.

It’s a real plus because any more gory detail would take away from the story.

Having read the previous installments of this story arc, I was kind of expecting a bit more of a payoff that just didn’t come at the end. It wasn’t a bad story, as it had it’s interesting parts (like the reemergence of Howards), but I was left with a kind of bland taste in my mouth after reading it. While the art was good, I felt that the writers got a little sloppy when depicting a child and what a child would realistically do in a world gone to hell. Overall, B.P.R.D. Hell on Earth #109: Wasteland earns three stars out of five.