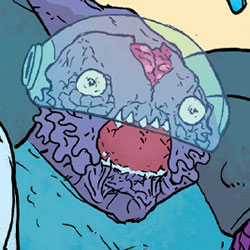 In the world of The Manhattan Projects, Jonathan Hickman has given everyone an interesting twist – in that they are all completely F’ed in the head.

Previously in The Manhattan Projects: Multiple personality disorder Joseph Oppenheimer has been brought into the Manhattan Projects to help General Leslie Groves defeat the evil forces that plague the world. Along the way, readers are introduced to dimension hopping samurai, cyborg Nazis, FDR: A.I., and any number of curious fellows who are tripping through the world the seems to be comprised of historical fact, sci-fi fantasy, and conspiracy theory turned up to 11.

ALBERT EINSTEIN AND THE SECRET OF THE DOOR

This issue turns its attention to Albercht Einstein, who for the last three issues is seen locked in a room, staring at a mysterious monolith that he is trying to decipher. When he enlists the help of Dr. Richard Feynman, the younger unlocks a door to an infinite universe full of potential.

And that is where it gets weird.

Through a series of flash backs, readers learn that the Albrecht Einstein we’ve been seeing, isn’t the Albrecht Einstein we know from the historical record. Instead, this Einstein came through the dimension door years ago, when the Einstein (and the real genius, but not the Real Genius), built it and turned it on. Evil Einstein isn’t as bright as real Einstein, and decided to abandon the real genius in another dimension before figuring out how the doorway worked.

On the one hand, this story seems a bit familiar, as we’ve seen the dual personality of Oppenheimer play out. On the other hand, this isn’t a mental issue, but rather two physical beings who didn’t share the same outlook on life. Evil Einstein is an interesting twist I wasn’t expecting, and I’m a afraid for what Jonathan Hickman has in store for Dr. Feynman in this twisted world.

I also liked how Hickman handled the meeting with the aliens, and how the Greys were done away with. It will be interesting to see how Groves deals with this situation when faced with the aliens big request… if we ever get to that point.

And that is really the big question – will there ever be a point to this series? So far, we’ve been presented with one bizarre Outer Moments episode after another with no clear ending in site, except that it’s the good guys versus the bad guys, but even the good guys could end up being bad guys…

Credit needs to be given to Nick Pitarra, who has done a fantastic job with the art in this series. Though it isn’t the normal style that I go for, his attention to the little details, and adding little bits and lines here and there, make the entire issue come together. There are a few times when faces look a bit skewed, but with Pitarra’s art supporting a great story, it all comes together perfectly.

The real credit for this issue’s success, though should really go to Jordie Bellaire, who uses colors in such a way that when you realize his color scheme is really foreshadowing the big reveal, it is already too late. It’s only after subsequent readings that the importance of the use of color comes through.

I don’t really know what Hickman’s end game is. Will we see the Earth’s take on aliens? Will the War of the Worlds play out on the page? Or will the scientists suddenly realize the folly of everything they do, and simply laugh themselves mad? I don’t know, and I don’t really care at this point – I’m in it for the ride, and Jonathan Hickman and Nick Pitarra have captured me with the strangeness on the page. I’m not sure The Manhattan Projects is for everyone, but for those that are into alternate history, this book hits the right notes. The Manhattan Projects #4 is well done, and earns 4.5 out of 5 Stars.