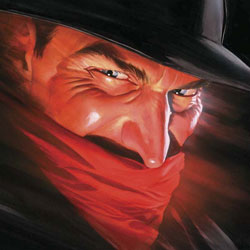 Who knows what evil lurks in the hearts of men? The Shadow knows! The Shadow returns to comic stores written by the man born to write him – Garth Ennis. The artist joining Garth will be Aaron Campbell. Featuring covers by fan favorite artists Alex Ross, Howard Chaykin, Jae Lee and John Cassaday. The Shadow #1 his stores in April 2012!

In the first issue of the ONGOING SERIES, it’s 1938 and The Shadow returns in a tale of blazing action and deadly intrigue, as a night of carnage on the New York waterfront plunges the mysterious vigilante into a conspiracy involving the fate of the world itself. As storm clouds gather across the globe, American Military Intelligence meets with a certain Lamont Cranston, determined to beat a host of spies and assassins to the greatest prize of all… but what that might be, only the Shadow knows. Be sure to get The Shadow #1 in April 2012!

“The Shadow is probably the last established character I like that I haven’t gotten around to writing yet, certainly on this side of the Atlantic,” says writer Garth Ennis. “It makes a kind of bloody, bullet-riddled sense: I always had a feeling our paths would cross sooner or later.”

“The Shadow is an awesome character in an awesome time,” adds artist Aaron Campbell. “I mean what’s not to like? You have the old school mystique of eastern mysticism wrapped up with a badass gunslinger!”

“Garth is a writer who was born to write The Shadow,” states Dynamite Entertainment President and Publisher Nick Barrucci. “Not since Howard Chaykin’s acclaimed mini-series have I been this excited for a Shadow series. Garth will take The Shadow to a new level, and Aaron will compliment his scripts well. I cannot wait for fans to see Garth’s take on the character!”