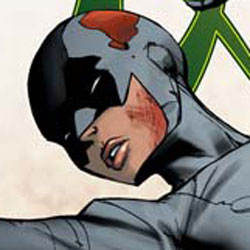 Dynamite Entertainment sent Major Spoilers a sneak peek of titles arriving in stores this week.  Take the jump for The Boys #48, The Green Hornet: Year One, Bullet to the Head #5, Queen Sonja #11, and many more.

THE BOYS #48
32 pages FC  • $3.99  •  Mature Readers
Written by GARTH ENNIS
Art by RUSS BRAUN
Cover by DARICK ROBERTSON
With Hughie absent, Butcher re-examines the Boys’ first encounter with the Seven, trying to figure out what went wrong. But first there’s some disquiet in the ranks to be dealt with, not to mention the return of an old and unexpected enemy- who finally, incredibly, has come into his own. Meanwhile, on the Seven’s floating headquarters, a flying lesson goes badly awry…
Proper Preparation And Planning, part one.

THE BOYS VOL. 7: THE INNOCENTS TRADE PAPERBACK
216 pages FC  • $19.99  •  Mature Readers
Written by GARTH ENNIS
Art by DARICK ROBERTSON, JOHN McCREA, RUSS BRAUN
Cover by DARICK ROBERTSON
So where are the real superheroes? The warriors for truth and justice, the defenders of the American way, the heroes who fight to make things right and ask for nothing in return? Hughie finds out when he meets the teenage adventurers known as SUPERDUPER… but unknown to the little Scotsman, Butcher has finally learned his secret. A dire scheme is set in motion, and at the vast superhero evangelist festival of BELIEVE, Hughie’s relationship with Annie January – aka Starlight of the Seven – reaches its terrible conclusion. And soon the Boys themselves risk being torn asunder…
This volume collects issues 39-47 of the New York Times Best-Selling series by Garth Ennis, Darick Robertson, Russ Braun and John McCrea, and features all of the covers by Robertson!

THE GREEN HORET: YEAR ONE VOL. 1: THE STING OF JUSTICE TRADE PAPERBACK
160 pages FC  • $19.99  •  Teen +
Written by MATT WAGNER
Art by AARON CAMPBELL
Cover by ALEX ROSS
Roaring to adventure from the Golden Age of radio, comes one of America’s first superheroes—THE GREEN HORNET! The time period is the 1930s and Chicago is ruled by a criminal empire that answers to no one and even holds the authorities in an iron-fisted grip. Accompanied by his faithful crime-fighting companion KATO, newspaper heir Britt Reid assumes a mysterious, masked identity in order to combat the criminal corruption that threatens to destroy his city.  For the first time ever, the origins and motivations of this classic character are explored and revealed in a story that combines historical accuracy with thrilling pulp drama!  Eisner Award-winning author MATT WAGNER (Grendel, Trinity, Zorro) and artist AARON CAMPBELL (Sherlock Holmes) weave an archetypical tale of heroism and intrigue that redefines this timeless tale for a whole new generation. Ride with Britt Reid and Kato in the powerful Black Beauty as they match wits with ruthless gangsters and racketeers.   Learn their secrets as they first begin their unique crusade against crime—THE GREEN HORNET: YEAR ONE!

“Matt Wagner does the same trick here that he did with Zorro, cutting straight to the heart of the matter, showing us WHY the character’s tics and habits work… making the story work if you’ve never read Green Hornet before.  Year One is excellent work from top to bottom, from story to art… 5 out of 5 stars.”  – MAJOR SPOILERS.COM

“Green Hornet: Year One is a terrific comic series and does justice above and beyond to one of the great classic radio heroes of all time.  Any pulp fan worth his fedora would be wise to pick it up.”  – PULP FICTION REVIEWS

BULLET OT THE HEAD #5
32 pages FC  •  $3.99  • Mature
Written by MATZ
Art and cover by COLIN WILSON
The penultimate chapter of the critically acclaimed masterpiece arrives with
Bullet to the Head #5! All of the violence, mayhem, and carnage of the previous issues come together in its most horrifyingly bloody issue yet!  Written by Matz and drawn by Colin Wilson (Ed Brubaker’s Point Blank), Bullet to the Head
distinguishes itself as the best crime noir masterpiece in today’s comics!

PATRICIA BRIGGS’ MERCY THOMPSON:
MOON CALLED #2
32 pages FC  •  $3.99  • Teen +
Written by PATRICIA BRIGGS w. DAVID LAWRENCE
Art and cover by AMELIA WOO
“NEGATIVE ART” retailer incentive cover by BRETT BOOTH
Coyote shape-shifter Mercy Thompson has just killed a raging werewolf in hand-to-hand – or is it fang-to-claw? – combat.
But now new dangers come from all directions. The dead wolf’s friends, the local wolf pack, even the boy she fought to save are all closing in. Can Mercy survive long enough to get to the bottom of a mind-boggling mystery…or has she bitten off more than she can chew?

QUEEN SONJA #11
32 pages FC  •  $3.99  •  Teen +
Written by LUKE LIEBERMAN
Art by MEl RUBI
Covers by LUCIO PARRILLO (75%) & MEL RUBI (25%)
Roots – explores a time before Sonja was a queen, before she was a legend, a time when she was just a girl lost in a big brutal world.  An orphan whose parents were butchered in front of her, and whose innocence was stolen.  A girl with something to prove, running from the past into the great unknown.

KEVIN SMITH’S KATO #5
32 pages FC  •  $3.99  •  Teen +
Written by ANDE PARKS
Art by DIEGO BERNARD
Covers by JOE BENITEZ (main), ALE GARZA (1-in-10) & JOHNNY DESJARDINS (1-in-25)
“Black, White & Green” retailer incentive coves by JOE BENITEZ
From the pages of KEVIN SMITH’S GREEN HORNET! He killed one Kato’s wife, and the other Kato’s mother.  Now, both Katos face off against Black Hornet in the action-packed climax of “My Father’s Daughter.”  Father and daughter fight together for their family honor, and their lives.  This epic battle issue ties directly into the hit Kevin Smith’s Green Hornet series.