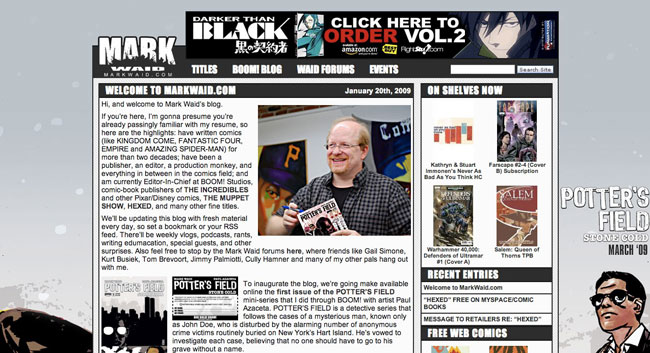 Boom! Studios has announced its Editor in Chief Mark Waid has launched his own blog site aptly named MarkWaid.com as a platform for the writer to stand up on the soap box and be heard.

“Who better to hand a megaphone to than a comics vet who’s seen it all and done it all?” said BOOM! Studios marketing and sales director Chip Mosher.Â  “Mark’s earned a reputation for being outspoken.Â  BOOM! is proud to sponsor a site where Mark can stand on his soapbox and harangue readers far and wide!”
“I don’t know if ‘harangue’ is the word I’d use,” added Mark Waid while glaring at Mosher, “but I’ve been searching for a regular venue where I can upload some of my comics stories and behind-the-scenes anecdotes and, in general, go on at droning length about comics history and comics criticism, turn over some rocks, and see how long I can go without saying something stupid and inflammatory that will send the collective wrath of comics fandom down on me. What time is it now?”

I wonder why Boom! Studios didn’t contact us?Â  We’d have been happy to host Mark’s thoughts on the industry here at Major Spoilers (nudge,nudge, wink, wink, know-what-I-mean?).Â  Now that ship is sailed, we’ll have to make MarkWaid.com a new daily stop on the information super highway of comics and pop culture.Â  MarkWaid.com is kicking off its first week by hosting the entire first issue of Potter’s Field on the site for free.