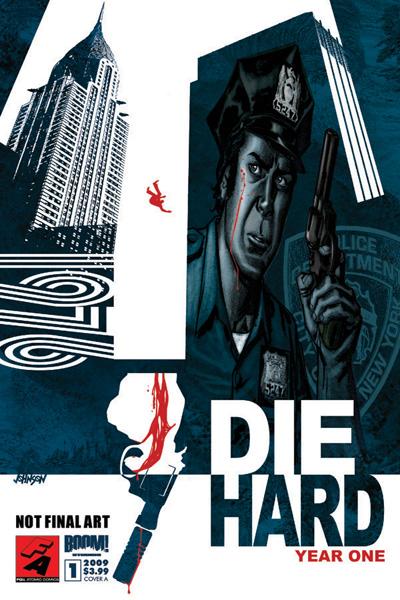 Yippee-Ki-Yay everybody!Â  Boom Studios is getting adapting another IP into comic book form, this time taking John McClane and spinning a tale of his first year as a NYC police officer.Â  The series is written by Howard Chaykin and follows the new police officer during the 1976 Bicentennial celebration.Â  It’s all part of Boom’s comics arriving in August 2009.

NEW ARC! AND ONLY .99 CENTS! This is your chance to hop on board the superhero event of 2009 that dares to ask: What if the worldâ€™s greatest hero decided to become the worldâ€™s greatest villain? Buy issue #5 for .99 cents and get the trade of the first four issues for only $9.99 and experience what everyone has been talking about. A â€œtwilight of the superheroesâ€-style story that examines super-villains from Mark Waid writer of KINGDOM COME and EMPIRE!

SPECIAL PRICE: $9.99. Itâ€™s a comic book industry event: the first four issues of the new original ongoing superhero series from Mark Waid! IRREDEEMABLE dares to ask the question: what if the worldâ€™s greatest hero decided to become the worldâ€™s greatest villain? A â€œtwilight of the superheroesâ€-style story that examines super-villains from the writer of KINGDOM COME and EMPIRE! Pick up IRREDEEMABLE VOL. 1 for $9.99 and buy the start of the next arc with issue #5 for an additional .99 cents. Thatâ€™s 11 bucks for 5 issues of the best superhero comic you will read in 2009.

BOOM! Studios is proud to present Americaâ€™s greatest action hero translated into the sequential art form for the first time! Every great action hero got started somewhere: Batman Began. Bond had his Casino Royale. And for John McClane, more than a decade before the first DIE HARD movie, heâ€™s just another rookie cop, an East Coast guy working on earning his badge in New York City during 1976â€™s Bicentennial celebration. Too bad for John McClane, nothingâ€™s ever that easy. Join legendary industry creator Howard Chaykin on a thrill ride thatâ€™s rung up over $1 billion in box office worldwide and become the gold standard for classic action! Yippee Ki Yay!

Toshiro Ono has spent his life making the best swords that have ever been forged and selling them to the highest bidder. But when his family is killed by a blade of his own makingâ€¦ Toshiro will do whatever it takes to make sure none of his swords ever kill again. Andrew Cosby, creator of EUREKA, and Michael Alan Nelson, creator of HEXED, brings feudal Samurai Japan to life like no other comic has done before.

He is a warrior. He is a Luxan. And he has a past. The tragedy behind one of Farscapeâ€™s greatest characterâ€™s is explored in this new mini-series. Before his life on Moya Ka Dâ€™Argo struggled to keep his marriage to a Sebacean woman alive under Peacekeeper pressure. And when Dâ€™Argo is under pressureâ€¦ Written by FARSCAPEâ€™s Keith R.A. DeCandido and Executive Produced by show creator Rockne S. Oâ€™Bannon.

The comic book that connects 28 DAYS LATER to its sequel 28 WEEKS LATER in a new ongoing series! Focusing on Selena, one of the three survivors of the first film, as she embarks on an epic journey of Selenaâ€™s return to Great Britain! Co-written by HEXED and FALL OF CTHULHUâ€™s Michael Alan Nelson and drawn by newcomer sensation Declan Shalvey.

â€œAll Speed. No Limits.â€ The end isnâ€™t nearâ€¦ itâ€™s here. America has become a wasteland, leaving the few cities that remain transformed into impenetrable fortresses. NICK MASTERS is a driver, the best there is. If you need something picked-up, delivered, or disposed of, Nickâ€™s your man. But when he fails to deliverâ€¦ all hell breaks loose. Part three of the epic saga that redefines the science fiction action genre. From the writer of HEXED and FALL OF CTHULHU, Michael Alan Nelson, collaborating for the first time with EUREKA creator Andrew Cosby!

Worldwide best-selling sci-fi author Philip K. Dickâ€™s award-winning DO ANDROIDS DREAM OF ELECTRIC SHEEP? – the basis for the film BLADE RUNNER â€“ comes to comics in an innovative, ground-breaking maxi-series with the full text, fully illustrated. Thanks to the Rosen Corporation and its invention, the Nexus-6 android brain, human beingâ€™s artificial counterparts are now harder to detect than ever. But bounty hunter Rick Deckard has a special weapon in his arsenalâ€¦the empathy test. With backmatter by Ed Brubaker!

John Crichton is used to being far from home. But now heâ€™s trapped in a new timeline, where his wife Aeryn is still a Peacekeeper! He sets Moya out on a mission to find her in hopes that the reunion of sorts will set things right. But what does Crichtonâ€™s wife in this timeline think of this? More FARSCAPE goodness from the showâ€™s creator Rockne S. Oâ€™Bannon.

He created Horror. Find out how horror created himâ€¦ as our intrepid author Edgar Allen Poe delves into the dark side of man. Golem Hell Hounds guard the secret of the Red Death! Will Poe live to tell the tale? Supernatural adventure for fans of books like HELLBOY!

She has solved every mystery known to man. But there is one mystery that remainsâ€¦ UNKNOWN! Find out the answer in the epic conclusion to the critically acclaimed mini-series from Mark (KINGDOM COME) Waid and EXCALIBURâ€™s Minck Oosterveer.

Novelist Alan Ripley was an unlikely hero, trying (and failing) to stop UNTHINKABLE terror scenarios he imagined from coming true. Now that heâ€™s finally succeeding, will he learn whoâ€™s using his mind as a blueprint for terror, and why? The answer finally comes from writer Mark (TWO-FACE YEAR ONE, CYBORG) Sable artist Julian Tedesco in this penultimate issue.

Sci-Fi Channelâ€™s smash hit show returns in this new trade compiling all the issues of the critically acclaimed, fan-favorite series masterminded by the creators of the show and told completely in continuity! EUREKA creators Andrew Cosby and Jaime Paglia are joined by writer Jonathan L. Davis (THE DUKES OF HAZZARD) with a story centering on the kids of Eureka High. Can Zoe find out why all her classmates are going goth? Read this volume and find out.

The movie event of the Fall is the comic book event of this Summer! JUNOâ€™s award-winning screenwriter Diablo Cody brings you JENNIFERâ€™S BODY starring Megan Fox as a demonically-possessed cheerleader with a taste for killing teenage boys! In this original graphic novel that ties into the movie and expands on its universe, BLACK METALâ€™s Rick Spears brings you even more hellish Jennifer stories with art by HACK/SLASHâ€™s Tim Seely, KICK DRUM COMIXâ€™ Jim Mahfood, DMZâ€™s Nikki Cook, and POPGUNâ€™s Ming Doyle.

Baby Jack-Jack, everyoneâ€™s favorite superpowered toddler, battlesâ€¦a nasty cold! Hopefully the rest of the Parr family can stay healthy, because normal denizens of Metroville are starting to exhibit superpowers. Can The Incredibles discover the cause of both outbreaks before the city is left in total shambles?

Sulley, Mike and Boo are back, and they are sure to generate plenty of chuckles for the Monsters, Inc. laugh factory! When acts of sabotage begin to damage Monsters, Inc. equipment, all the evidence points toâ€¦Mike?! Can Mike convince Sulley to help him find the true culprit?

The timid Kermie Pan resides in the magical realm of Neverswamp, where the pushy fairy Piggytink tries to toughen him up! One night, while searching for his shadow, Kermie Pan and Piggytink encounter the Darling children, who run away to Neverswamp and encourage Kermie Pan to battle Captain Gonzo! Features A covers by Eisner-award winning MOUSE GUARD artist David Petersen!

Lightning McQueen is hanging out with his friends in Radiator Springs when he realizes that everyone knows his story, but he doesnâ€™t know anyone elseâ€™s. McQueen wants to know how his friends ended up in Radiator Springsâ€¦and why they decided to stay. Issue #2 explores Filmore and Sargeâ€™s unlikely friendship. Even though oneâ€™s a hippie and the other is a military man, the two are inseparable!

Nemo, Dory and Marlin conclude their dangerous journey, searching for a way to rescue their dying reef! Facing incredible odds, Nemo travels the great blue sea to save the one thing that matters most of allâ€”home. Will the mysterious jellies finally provide a course of action that will save the reef?

Roger Langridgeâ€™s celebrated run on THE MUPPET SHOW comic continues! Scooter learns that a cache of treasure is hidden somewhere within the theaterâ€¦and when Rizzo the Rat overhears this, the news spreads like wildfire! Meanwhile, Animalâ€™s acting very strangelyâ€”heâ€™s now refined and well-mannered! And why is Kermit acting like heâ€™s too cool for school?

This hilarious trade collects all four issues of Muppet Robin Hood. The Muppets tell the Robin Hood legend for laughs, and itâ€™s the reader who will be merry! Robin Hood (Kermit the Frog) joins with the Merry Men, Sherwood Forestâ€™s infamous gang of misfit outlaws, to take on the stuffy Sheriff of Muppetham (Sam the Eagle) and the wicked Gonzo of Gisbourne!

This action-packed trade collects all four issues of TOY STORY: THE MYSTERIOUS STRANGER. Woody, Buzz and the gang encounter a mysterious egg-shaped toyâ€¦ They crash Andyâ€™s science fair in a heroic attempt to repair his broken exhibitâ€¦ The toys must make peace with the familyâ€™s new dog, Busterâ€¦ Can Woody stop him before itâ€™s too late?