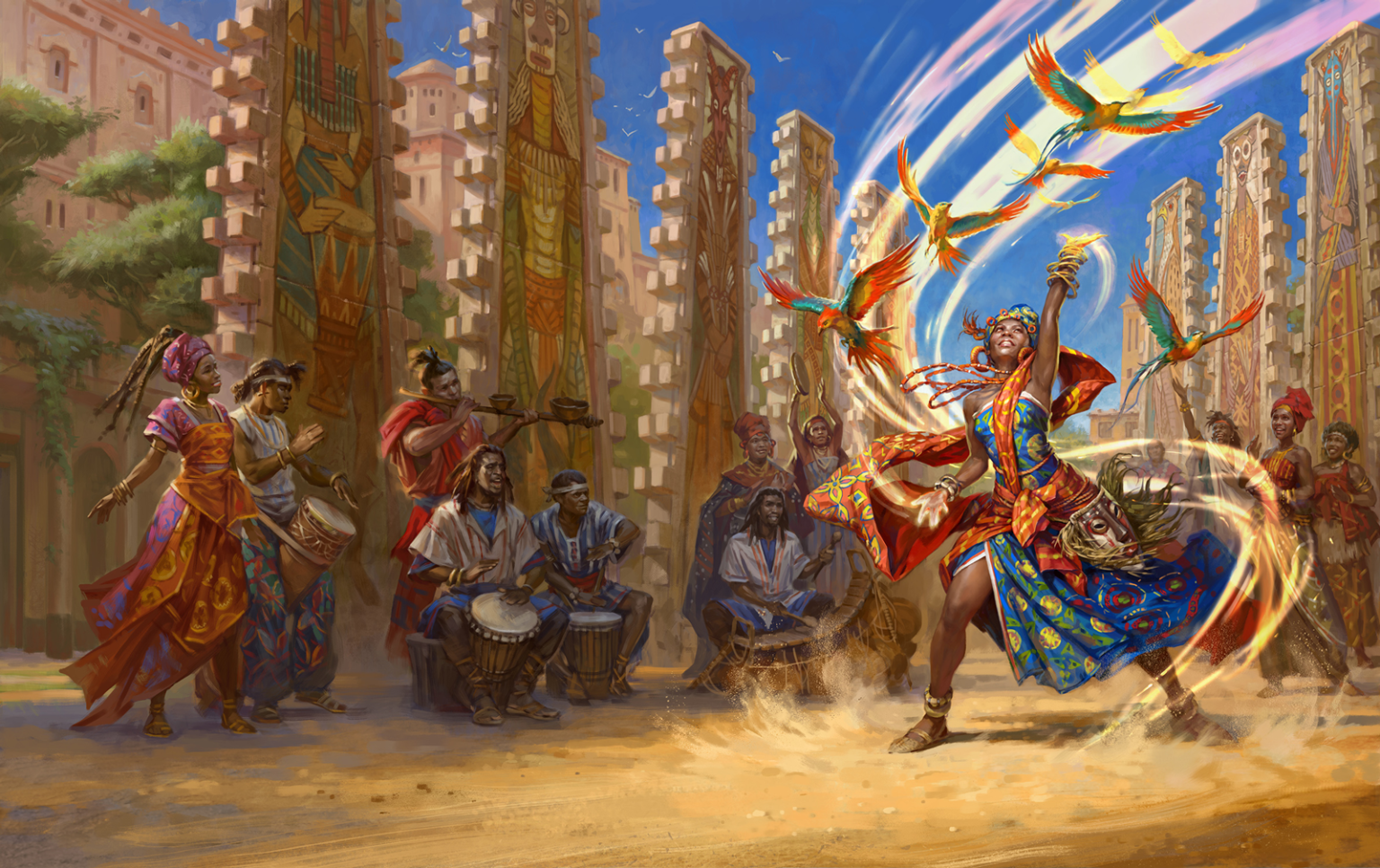 Thank you Paizo for the complimentary copy of Lost Omens: The Mwangi Expanse! Let’s crack open the book and take a First Look at this beautiful book on TTRP Corner! I was on the fence of if I should cover this book. I tend to try and cover game systems and their mechanics over setting/lore books. But I have heard interesting things about this section of Golarion. Paizo has stressed that they are trying to give respect to distinct cultures and philosophies. I knew that I had to take a look and give my perspective on this book. On top of that, the art here is beautiful. Paizo really takes their art to the next level and every page seems well thought out for the setting.

Now, I want to say that I will not go over every section of Lost Omens: The Mwangi Expanse. This is a 300+ book filled with rich history. Rather, I’ll just be talking about the things that jumped out at me. To keep this article succinct, I have compacted the review into three sections: lore, mechanics, and adventures.

Lost Omens: The Mwangi Expanse opens us up to a new section of Golarion with several new cities and a vast landscape to explore. While I’m not going to go over every nation in detail, I wanted to point out how diverse this place is. Even from city to city, you are getting tons of a new ideas. From the pirates of Bloodcove to the Deathless Empire, you are going to see places that are explained in detail. Every area shows us how government functions, how the citizens take part in everyday life, key locations, and even smaller details like fashion or factions within the city. Kibwe, for example, show the daily life of a worker. From the hearty breakfast, to the break in the middle of the day, you learn the pace of life. This attention to detail supplies immersion for your setting. Even if you are not planning to run a game in this section of Golarion, I think this is a prime example of how to create three-dimensional cities.

There also did an interesting job with the religion of the Mwangi Expanse. Not only did they add specific deities to this area of Golarion. They provided perspective on the current deities. There is a wonderful picture of Desna and an interpretation of her from the Mwangi perspective. This adds a level of depth because it shows us a different way to perceive something that Pathfinder fans are familiar with. Great ideas here.

The thing that I am most likely going to draw on for my homebrew worlds is the cultures of the different people.  There is a group of jungle-dwelling elves known as the Ekujae. From the outside, they are self-sufficient towns and villages but in reality, they are a united nation that ban together when the need arises. They protect the world against demons and dragons, in case the great darkness rises again. This is an idea that I can draw inspiration from and put into my own setting. Which would reduce my preparation for my games tremendously.

There are not that many new mechanics in Lost Omens: The Mwangi Expanse, but rather a focus on six new ancestries, including the Gnoll and the sentient spider ancestry Anadi. I was underwhelmed by the choices you receive. Now I understand that this is first and foremost a setting book. But when you introduce a new ancestry, I want to see a complete set of choices. In Pathfinder Second Edition, you get an ancestry feat at 1st, 5th, 9th, 13th, and 17th level and I expect to see choices at each of those levels. Unfortunately, only two of the races have feats for level 17. Meaning that if you want to play those characters, you don’t get anything cool for your final choice, you must take something lower level. I’m sure that there will be feats for these ancestries eventually, but to not have them here makes it seem that they did not get enough design time to fully flesh them out. But maybe playing a sentient spider is worth not getting that level 17 feat!

Beyond that, the new gods have mechanics attached to them and there are a few new monsters at the back of the book. I would not advise picking this book up if you are looking for additional mechanics for your game. Pick it up for the great lore instead!

WHAT KIND OF ADVENTURES CAN YOU HAVE?

My main concern when being introduced to a setting like this are plotlines that involve “outsiders trying to save the tribal culture.” But Lost Omens: The Mwangi Expanse makes it quite clear right from the beginning that you should base stories from the rich history and the mysteries that surround the area. In fact, you are encouraged to have a conversation about colonization, globalization, and what foreign influences may have on the region. These themes exist but the players are not designed to be the catalyst of colonization. I respect that quite a bit.

My first instinct for a story is the Deathless Empire. Mzali is ruled by an undead sun-king, Walkena. This is a divided nation that sets up theocracy and the diving warrior type verses the people who live in the fringes of society. I think this could be an excellent theme to explore and a gamemaster could provide reasons for a party to side with either faction. It will be interesting to see citizens who are able to succeed in a kingdom that really pushes for older ideologies or rebels who want to see the undead king perish. I think it would be incredible to have a campaign where the party are citizens of Mzali and they must try and figure out how to live. On top of that Walkena seems like an engaging antagonist. He is trapped in a child’s body and has childlike immaturity but is a brilliant tactical mind.

This is a book designed to support the upcoming Strength of Thousands adventure path. The rich history and culture provide an excellent backdrop for a game master to explore with his players. But more importantly, I think it shows an excellent way to approach non-western cultures. In the past, we have gotten books that express non-traditional cultures as inferior. Now, we are getting to see things from the perspective of the citizens living in those cultures rather that the outsider. Great work by Paizo here and I am excited to see more places get this same treatment.