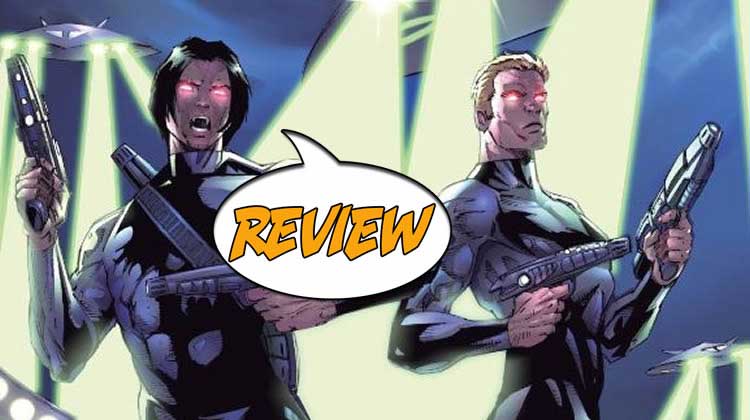 It’s “vampires versus aliens” in this action-oriented ongoing comic series. An alien abduction doesn’t go as planned as two friends find they must save Earth from invaders who see humanity as our planet’s worst enemies!

SOLICITATION: The Unearthians is an action-packed sci-fi narrative where two best friends are abducted and transported into an underground base somewhere on Earth. During the abduction Mateo and Carter decide to uncover the truth when they discover the dark agenda the aliens have in store for Earth and the entire Galaxy. So, they decide to fight this injustice. But Mateo and Carter also have a secret of their own which they will use to their advantage; a secret that the aliens never saw coming. This is an original action-packed sci-fi story where good versus evil collide for a greater cause.

This comic series mixes some standard tropes with interesting surprises, and the action just never stops! I like that in my reading, actually!

First up, let’s get the expected elements out of the way. Yes, this is a “buddy” book with two good-looking guys (who greatly resemble young models) who are thrust, against their will, into a situation apparently far beyond them in which they must save the Earth from aliens who have come to rid the globe of its greatest threat—the human beings who live here. (Ra’s Al Ghul would love them!)

It’s also good to see that the aliens have a social structure that has the “greys”, the ones from Roswell, to the more intelligent levels. It reminds me of Star Trek: Deep Space Nine and the Dominion, who also had an interesting organization from top to bottom. Not only that, but the vampires have several levels to them, and watching the guys sort all that out is portrayed in an interesting way, including flashbacks. The Alicio character was particularly interesting to me. The first from Dracula—well, that’s something I’m going to want to learn more about! Hope he comes back!

The fun for me starts when we discover that Mateo and Carter aren’t just your average hunks. They have actually been transformed into vampires and are still learning what they can do with this newfound power. Boy, are the aliens ever surprised!

Also, I’ve always wondered what would happen if a vampire actually drank alien blood. Well, this comic explores just that option, and does it very well. It’s not always a good thing, by the way!

The pacing in this comic is a good one for me because things unfold slowly. It seems like each issue is a chapter in this tale, and one event pretty much fills the pages of each one. There’s an issue in which Carter and Mateo are in a trash compactor a la Star Wars, and the book is devoted to them discovering what they’re up against and how to get out of this predicament.

This whole story would make an excellent SyFy series, I believe. After all, we’ve seen Cowboys Versus Aliens and such, so why not this story? When that cable channel remade the British show Being Human, they replaced average-looking characters with much more visually appealing people. It could work again!

The dialogue is engaging as well, and not everyone sticks around forever! That’s something I like in this kind of story.

I always break down a comic’s art on two levels—facial expressions and action sequences. This book has a simpler style to it, and I find the battles very compelling to read. This style doesn’t allow for a whole lot of variation when it comes to faces, though. A little more detail now and again would really help.

A lot of the issues take place on the alien ship, and that is captured very strongly. I do get something of a feeling of being in an unusual environment when we’re there, although I did find it odd that aliens needed a waste disposal system like we humans have. Ah, it still worked!

One of the great things, if there are any, about the current pandemic situation is that it allows readers like me to go where I haven’t gone before, to coin a phrase. That’s how I got into Unearthians—I was anxious to find something to delve into, and this series presented itself on comiXology. I am hooked and will be along for the ride from now on!

This book is an engaging mix of the expected and the unexpected, so I like that! I do hope Mateo and Carter suffer some kind of loss before too long. I’m happy when the aliens take it on the chin, but our guys need to take a few steps back more often so they are less videogame avatars and more believable, much like the brothers in Supernatural. Hopefully, that will take place! It shouldn’t be too easy!

77%
77%
Unearthly Adventure
I got into Unearthians because I was anxious to find something to delve into, and this series presented itself on comiXology. I am hooked and will be along for the ride from now on! This book is an engaging mix of the expected and the unexpected, so I like that!
Camile Cortes EdE Edwin Estrada Mauricio Alvarez Moras Productions Omar Mora Review The Unearthians
Share. Facebook Twitter Pinterest LinkedIn Tumblr Email
Previous ArticleSuperman: Man of Tomorrow #4 Review
Next Article Retro Review: Archie #601 (November 2009)