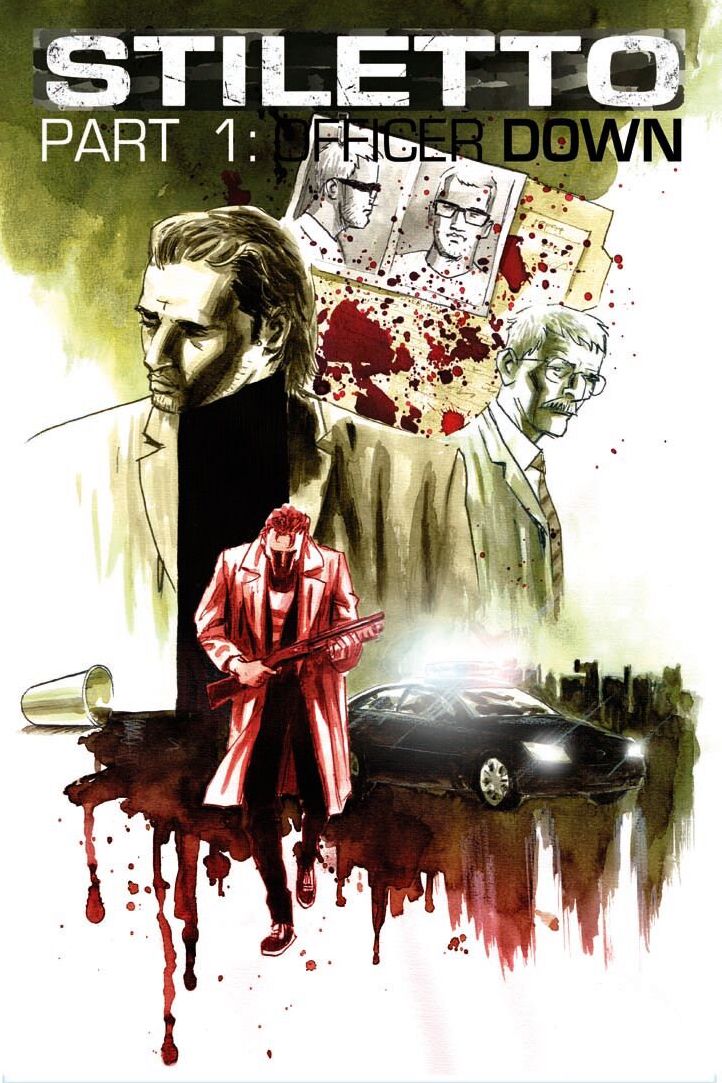 Lion Forge gives comic book fans another reason to be thankful this holiday season, with news that the 2013 hard-boiled crime noir series Stiletto, from writer/artist Palle Schmidt, will be translated and expanded for release in the United States next year! Additionally, the St. Louis–based publisher of comics for everyone unveils a brand-new storytelling format with this series to help expand the serialized reading experience, with three action-packed 48-page issues at just $5.99. This will give fans and retailers a low-risk way to jump on board with a brand-new original series! In addition to value pricing, Lion Forge will offer the first issue of this limited series as FULLY RETURNABLE to retailers!

“Stiletto looks like a buddy cop movie at first glance, but you’ll definitely be surprised to see where it goes,” says Denmark-based writer and artist, Palle Schmidt. “This is a gritty neo-noir full of twists and turns, corruption, betrayal, and greed. I spent years working on the book, really pouring my heart and soul into the project.”

A crime story with a twist. The brutal slaying of two police officers guarding a material witness pin detectives Alphonse and Maynard against their toughest adversary yet. But as they get further into their investigation, they uncover a leak inside the police department known only as “Stiletto.”

What appears to be a gritty police drama takes unpredictable turns as our heroes race against the clock to solve this double homicide and flush out the mole that puts them all at risk to the criminal underworld.

“Palle Schmidt is one of those visionary writer/artist combos you rarely see,” says Lion Forge senior editor, Greg Tumbarello. “His artistry and storytelling pull you into an intricate underworld that engulfs the senses and blurs the line between reality and fiction, making you feel like you’re there on a ride-along with our detectives as they desperately search for the killer who has claimed the lives of two fellow officers. Stilettoweaves a thrilling mystery that flips the entire crime genre on its head and keeps you guessing until the pulse-pounding conclusion.”

“I’m thrilled we’re able to present Stiletto in this longer format which has given me room to fully realize my original vision by expanding the story with new content,” continues Schmidt. “Creatively, it’s been a fascinating balance—being able to delve further into the darkest aspects of the story’s themes, while maintaining a profound love for these tragic characters drowning in moral ambiguity.”

Stilettowill be solicited in Diamond’s January-dated PREVIEWS catalog for release in March 2019. This three-issue limited series features a brand-new expanded 48-page reading experience at a value price of $5.99, with the first issue being offered to retailers as fully returnable.

Palle Schmidt is a freelance illustrator, writer, and comic book artist living in Copenhagen, Denmark. He is known for his graphic novels The Devil’s Concubine (IDW Publishing, 2011), Stiletto (Fahrenheit, 2013), and as the artist of Thomas Alsop (BOOM! Studios) with writer Chris Miskiewicz, dubbed “Best Mini-Series of 2014” by USA Today. Besides writing his own comics and YA novels, he teaches comics on ComicsForBeginners.com and has a podcast with writer interviews (in Danish) at plotcast.dk. He blogs at palleschmidt.com.