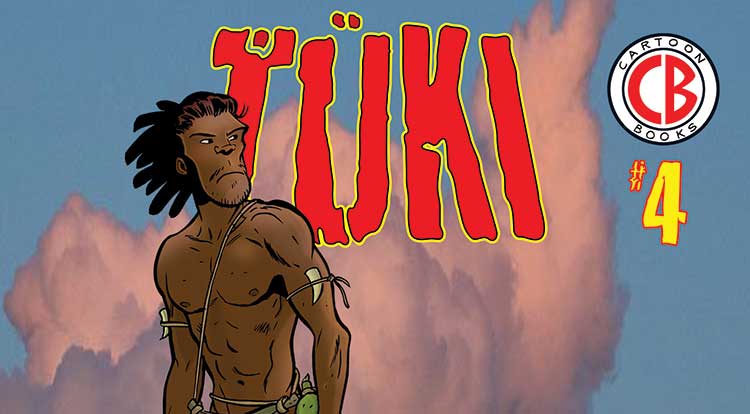 The next issue of Jeff Smith’s latest ongoing comic book, TUKI SAVE THE HUMANS #4 will be cancelled, and re-solicited in the October Previews for December shipping. Cartoon Books made the difficult decision to delay the release of TUKI#4, originally planned for a May 2015 release, to allow for Jeff to properly heal a previous arm injury that has resurfaced.

“The past 12 months have been really busy,” says Smith, “and last month, after doing two issues of TUKI back to back, I noticed my arm was getting numb. I’ve had trouble with carpel tunnel syndrome before, and while I haven’t crossed the line, it’s not something I want to mess with.”

“I also have a secret project I’m working on that is adding to the workload,” he continued, “so I’ve decided the best thing to do was to slow down, move the book to where it will be best for TUKI. Sincere apologies to all of my readers, and I thank you for your patience. We plan to add a few surprises to the issue and hopefully the wait will be worthwhile!” About TUKI SAVE THE HUMANS: Jeff Smith’s latest ongoing comic book series tells the story of a wandering Homo Erectus named Tuki, the first human to leave Africa two million years ago, when a great ice age gripped the earth, trapping all moisture in the polar icecaps. Vast tropical jungles gave way to dusty grasslands, and all living creatures struggled on the edge of extinction, including the many species of hominids. Based on the latest findings of paleontology, TUKI blends humor, mythology, and prehistoric adventure. TUKI won the 2014 National Cartoonist Society Silver Reuben Award.

About Jeff Smith: Jeff Smith is the bestselling author/cartoonist of the BONE and RASL graphic novels. BONE won numerous awards around the world, and RASL won the 2014 Eisner Award for Best Graphic Album. In 2005, BONE was chosen to launch Graphix, an imprint of Scholastic Books. Smith was the guest editor of Best American Comics 2013.