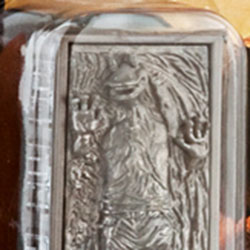 Hasbro has a ton of exclusive toys coming to the San Diego Comic-Con, and Star Wars fans are going to want to get their hands on the Special Edition Carbonite Chamber Collector’s Pack.

STAR WARS VINTAGE SPECIAL EDITION CARBONITE CHAMBER COLLECTOR’S PACK
(Approximate Retail Price: $79.99; Ages 4 & up; Available through HasbroToyShop.com Booth #3329 at San Diego Comic-Con)
Pretend to visit an alternate reality with this incredible package of seven 3.75” STAR WARS figures—one figure from each film in the Saga, and one figure only available in this collectible set. Each figure is individually carded with packaging that pays tribute to a “lost” line look that Kenner considered before going with their classic black-and-silver look! This Comic-Con special edition pack will be fans’ first chance to get the “lost” packaging, available this fall as variants in the STAR WARS VINTAGE COLLECTION line. In addition, this special collector’s pack will be the only place to get an exclusive treat for fans— a 3.75” carded JAR JAR BINKS in CARBONITE, which will be hidden in the center of the packaging and can be revealed by raising it through the “CARBONITE CHAMBER” top of the case. The other figures included are a standard JAR JAR BINKS (EPISODE I), CLONE TROOPER LIEUTENANT (EPISODE II), SHOCK TROOPER (EPISODE III), SANDTROOPER (EPISODE IV), PRINCESS LEIA (EPISODE V) AND DARTH VADER (EPISODE VI).