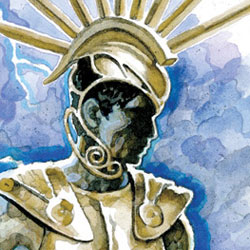 Archaia Entertainment sent Major Spoilers a sneak peek of two collected trades that arrive in stores this week.  Take the jump for a look at Critical Millennium: The Dark Frontier, and Immortals: Gods and Heroes.

Mankind’s rise and fall in space begins here! Two thousand years from now, the Earth is nearly dead. A bold group of explorers led by philanthropist Thomm Coney pushes forward to take the first tentative steps out of Earth’s solar system. Their quest: new worlds to colonize, so that humanity may yet have a chance at survival. Facing impossible odds, political agendas, and a fanatical terrorist regime bent on their destruction, Coney and his crew brave the dangers of a potentially volatile star drive in order to preserve a civilization intent not only on killing itself, but also on taking down every other living thing around it. Will mankind set aside its greed long enough to see a future amongst the stars? Collects Critical Millennium: The Dark Frontier #1-4 and contains extra material, including data sheets, sketchbook pages, starship information sheets and more.