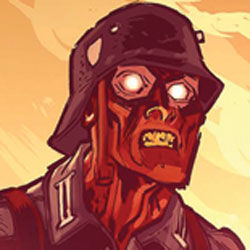 The Apple App Store has experienced an influx of zombie war comics as Devil’s Due Digital releases their new FUBAR app for the iPad, iPhone, and iPod. The FREE app serves as a comic reader for each of the downloadable issues—each only $0.99!

FUBAR is available on the Android Marketplace and Amazon App Store—each stand-alone issue is available as an app for still only $0.99 per issue!

FUBAR features 15 stories of the zombie-infested European warfront (as well as a zombie pinup gallery of the major players in the war). From Sussex to Stalingrad, you’ll see a group of soldiers’ last stand in a bunker, a blind boy navigating zombie-laden battlegrounds, a female sniper protecting a wandering uninfected child from atop a tower, an amputee awakening on the operating table with zombies banging at the door, and so much more in this series. Markus Seaberry from GeeksOfDoom.com says FUBAR “combines the ugly side of combat with the fear and hopelessness of the zombie genre for a truly original reading experience.”

“This FUBAR bunch are the bravest, best crop of young writers and cartoonists that this nation has spawned in a long, long time.”
-Timothy Truman, Writer-Illustrator: Conan, Jonah Hex FUBAR will also soon be available through ComiXology, iVerse, Graphicly, and more!

About Jeff McComsey
Jeff McComsey [Editor in Chief of FUBAR, American Terror: Confession of a Human Smart Bomb.] is a freelance artist carving out a living illustrating funny books and anything else that comes within arm’s reach. When Jeff isn’t chained to his drawing board, he enjoys spending quality time with his all too understanding bombshell girlfriend, Samantha, in their swanky Lancaster City pad. Check him out at http://mccomseycomix.wordpress.com/ and take a look at more FUBAR info at http://zombiefubar.wordpress.com/ .