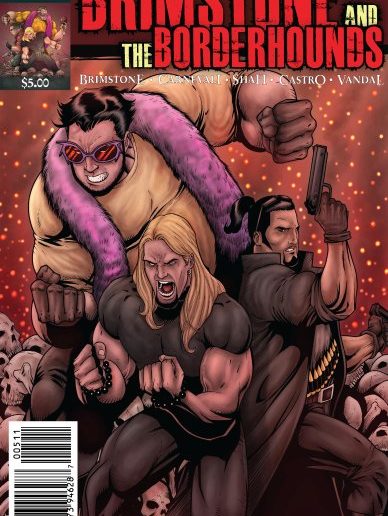 Hound Comics, Inc. is pleased to announce that their flagship title Brimstone and the Borderhounds will now be available to comic store retailers worldwide through Diamond Comic Distributors’ July Previews.  Diamond, who is known to be the world’s largest comic book distributor, presents issue number five entitled, ‘Contest’ this month set for release in October.  “We are incredibly excited to be featured in the Previews catalog” says Hound Comics’ Treasurer and Lead Inker, Allen Chickering, “I know that I personally grew up purchasing my entire comic collection from local stores, so it’s great to have our book readily available to the neighborhood specialty shops.”

Fans and store owners alike will be delighted to hear that starting with issue five, Brimstone and The Borderhounds will become single-shot, single-story books, allowing the title to be perfect for longtime fans and curious newcomers to the brand.  This announcement is not meant to scare away readers who rely on the Hounds to give them their ‘in-depth’ storyline fix as there will always be several underlying stories taking place to quench the thirst of the fans who are there for the long haul!

Brimstone and the Borderhounds issue four will be tailed by the release of Brimstone and The Borderhounds: Forza Infernis; a 3D fighter style video game revolving around fan-favorite characters from the Hound Comics Universe.  First revealed and viewed at Wizard World Philadelphia’s June event, the game will become available shortly for the iPhone, iPod, iPad and Android devices.  “The initial plan was to launch Forza Infernis last month, however due to unforeseen circumstances out of our control, it looks as though the game should be launching by month’s end.” says recently promoted, Etan Wish; now Senior VP of Operations and Project Management for Hound Comics, Inc.

“July has proven to be an extremely monumental month for us,” says CEO William ‘Brimstone’ Kucmierowski, “Not only have we officially begun our relationship with Diamond via premiering in Previews; but the Brimstone and The Borderhounds title becomes a featured brand in every one of Barnes & Noble’s 700+ locations!  I’ve got to believe that’s pretty impressive.”

For more information on Brimstone and The Borderhounds, Forza Infernis or Hound Comics… please visit the Official Website at http://www.HoundComics.com