Captain Rex and Commander Cody must find the traitor in their ranks in â€œHidden Enemy,â€ an all-new episode of the hit animated series STAR WARS: THE CLONE WARS, premiering at 9 p.m. ET/PT Friday, Feb. 6, on Cartoon Network.

In the episode, the clones discover evidence that one of their brothers is leaking information to the enemy. Faced with the betrayal, Cody and Rex must uncover the spy before he is able to thwart the Republicâ€™s efforts to liberate Christophsis from a Separatist siege.

Director Steward Lee and writer Drew Greenberg were both drawn to the chance to look at the first break in the ranks of the clones â€“ an ominous sign of things to come.

â€œI thought it was interesting because the cloneâ€™s logic is understandable,â€ Lee says. â€œHe no longer wants to be just a slave to the Jedi, and wants to try and break that infrastructure. He thinks heâ€™s doing the right thing for all the clones and that the sacrifice is worth it.â€

â€œIf one Clone can break from his brothers, and what he is bred for as a soldier of the Republic, and act on his own,” Lee says, ” how many more would do the same? This creates an interesting beginning of something to come.â€ 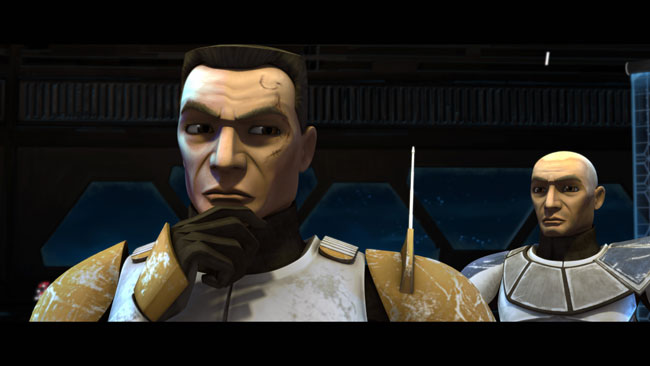