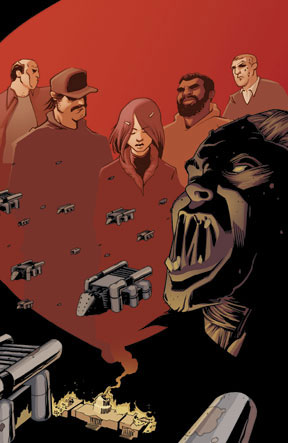 From the writer of YOUNG X-MEN, AMAZING SPIDER-MAN, and the co-creator of television’s ELI STONE comes a science fiction epic that explores the aftermath of Earth’s most brutal conflict. For ten years the alien invaders have laid waste to our planet, but now they’ve vanished, leaving the survivors with two questions – “Where did they go?” and “Where does humanity go from here?” It’s existential questions with alien-fueled intrigue, and there’s no better time to get on board as Oni Press is proud to announce its Gold Sponsorship for this years FREE COMIC BOOK DAY coupled with a $6 RESURRECTION trade paperback!

â€œWe want to give fans who might have missed out on the first arc a quick introduction and an easy way to get caught up,â€ said managing editor Randal C. Jarrell. â€œThe FCBD issue, RESURRECTION #0, is a stand-alone issue that can be picked up and enjoyed independent of any knowledge of the previous series. If they like it, and we know they will, then they can turn around and on the same day pick up the entire first arc of RESURRECTION for just six bucks!â€

The trade paperback entitled, RESURRECTION VOL. 1: THE INSURGENT EDITION hits store shelves on April 29th, the Wednesday just before Free Comic Book Day. With 184 pages of content, collecting the first six issues of the series and the double-sized annual, RESURRECTION VOL. 1 is the perfect opportunity to get initiated into Marc Guggenheim’s critically acclaimed storyline.

Marketing director Cory Casoni said, â€œAll of this is leading up to the new arc of RESURRECTION that launches in June. The second arc begins exactly where the first arc began, but it follows a different group of survivors. Marc’s story adds so many new layers to the last arc and is complimented perfectly by industry newcomer Justing Greenwood’s art.â€

â€œWe’re so confident about this series that we’re relaunching it in full color this summer,â€ commented editor in chief, James Lucas Jones. â€œRESURRECTION will be one of only a handful of color books that we’ve ever published. The original arc was black and white, but we realized in approaching the series again that with the huge scope of the piece, the decimation after the war, the rebuilding of humanity, it simply called for color.â€

When asked about this change, Marc Guggenheim commented â€œI’m really pleased with all the support Oni has given to me and to RESURRECTION.â€ And to the fans he added â€œWe’ve got some really amazing stuff in store for you. I can’t wait for the release.â€